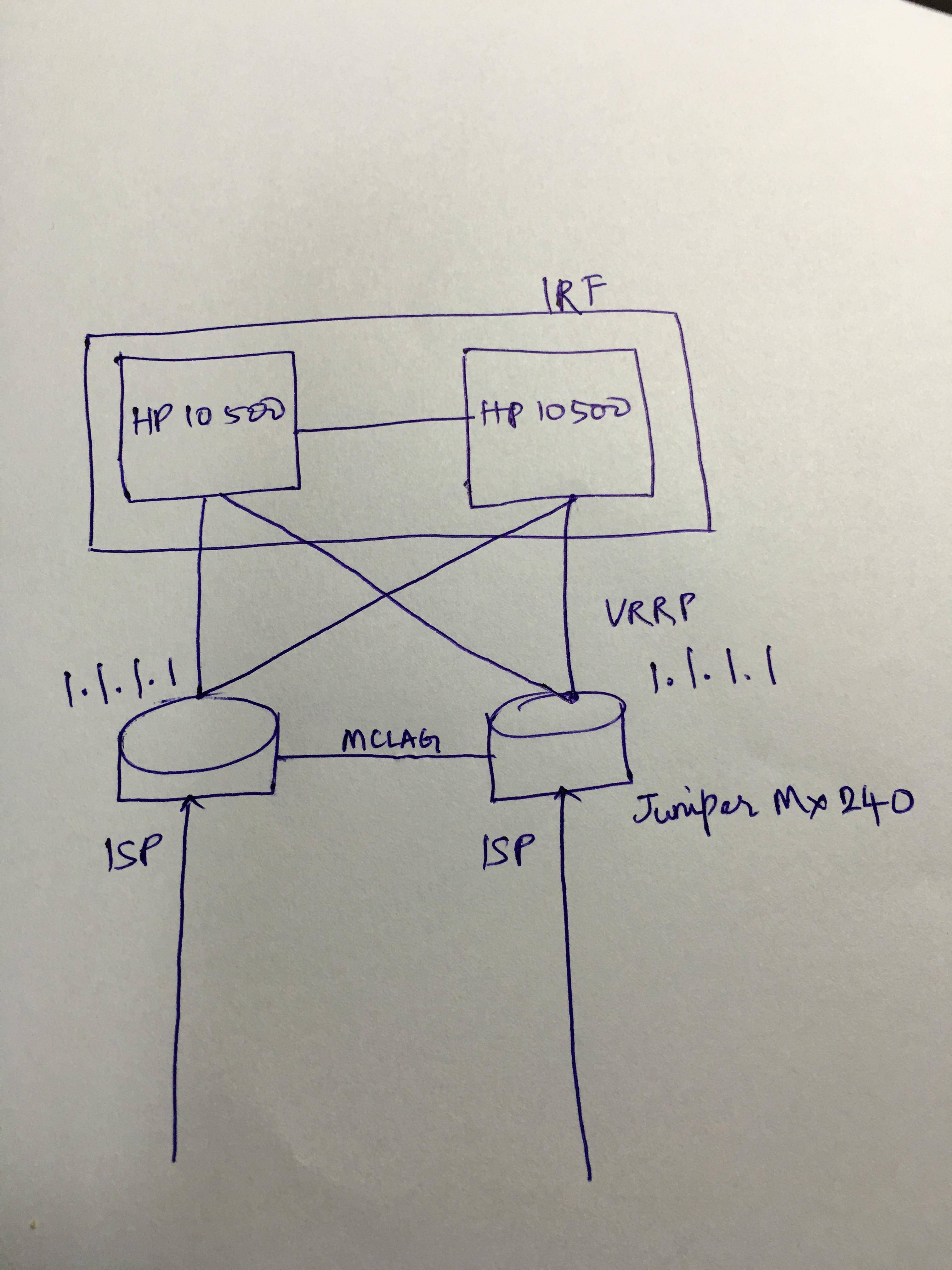 I have a pair of Juniper routers each one having drops from ISP. We advertise same IP blocks from both the routers on WAN interface. Now on the Lan side, we have pair of HP core switch running IRF mode. What we would like to do is,

Now for any incoming traffic, it is active-active, traffic can reach any router and goes to any core switch and works. Question is,

It looks like it is possible to configure VRRP as active/active when used with MC-LAG. See this document: https://www.juniper.net/techpubs/en_US/release-independent/nce/information-products/pathway-pages/nce/nce-145-mc-lag-ex-core-campus.pdf#page8

VRRP works on a LAN between a router and hosts on the LAN, and it advertises virtual IP and MAC addresses to the hosts on the LAN. The routers trade messages on the host LAN to share their priority with the other router(s). The router with the highest priority is the active router on the host LAN. If the other router(s) can't contact the active router on the host LAN, the remaining router with the highest priority will take over. This takes some time, during which traffic will be lost.

I believe your switches are layer-3 switches, and by using IRF you can make them look like a single layer-3 switch which can be the gateway for all the user VLANs, obviating the need for VRRP. The links between the virtual layer-3 switch and the routers should be routed links, and a routing protocol will failover much, much, much faster than VRRP.

Not the answer you're looking for? Browse other questions tagged routing hp ieee-802.1ax juniper-mx vrrp or ask your own question.

10
PIM-SM multicast and HSRP/VRRP
6
In and Outbound Dual VRRP connections
1
Port-Channel Interface Configuration EtherChannel and LACP in same Port-Channel
1
VRRP dual ISP setup
2
router on a stick and VRRP on the same router and full redundancy possible?
1
What criteria do routers use to sense a WAN outage when using VRRP?
1
Possible reasons for both VRRP and HSRP on same router
2
Best way to setup VRRP if a router fails
3
Does VRRP or HSRP work with 2 different upstream ISPs?
2
Is it possible to make a truly active\active L3 VRRP\HSRP configuration between two Nexus in a vPC