I have a question about hole punching.

Both A and B connects to S. S learns the random NAT ports of clients. Then sends the IP/Port info to clients. Clients have each others IP/Port info from now on. Client A send a packet to B with a new port because NAT uses a new port if the destination is different. Than client B's NAT device receives the packet and drops it. So client B doesn't know the port of A which A uses to communicate with B, not the rendezvous server. Than B sends a packet to A's port that A used to communicate with server.

Won't A's NAT device drop the connection because A used this port for a different destination ?

Client A sends a packet to B with a new port because NAT uses a new port if the destination is different.

Client A will use new port for different destination only if client A is using SYMMETRIC NAT which is the biggest problem in VOIP communication. Symmetric NAT not only translates your internal IP but also translates your port each time you connect to new destination. Rendezvous server S doesn't know that Client A has changed its port for contacting Client B.

Then B sends a packet to A's port that A used to communicate with server.

When client B sends a packet to A, that will be useless because B doesn't know that A has changed its port and the port which client B has taken from the Rendezvous server is obviously closed.

Won't A's NAT device drop the connection because A used this port for a different destination?

If either of the client was not using symmetric NAT then simply client A sends a "UDP packet" to that IP:port of B which was taken by A from the Rendezvous server earlier. Ultimately this packet will be blocked too by B because B didn't request anything from A but A still thinks that its packet has reached to B because packet was sent over UDP. Then B will send a packet to A on that IP:Port on which A was listening to rendezvous server. But this time A has to accept the packet from B because A thinks that this a response of that request which A has sent to B earlier. Then A will send a packet to B again and B will accept it as a response. Connection is established. This is called UDP hole punching.

But how the communication will be established in the case of symmetric NAT? The standard solution is using the TURN server which stands for traversal utility over relay NAT. Turn server will act as a middle-men between both the clients and it won't be affected even If either or both the clients are behind symmetric NAT. 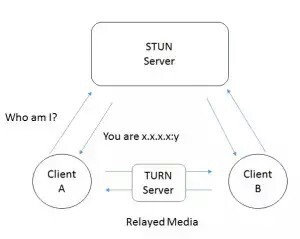 Instead of TURN server clients can also use DMZ and Port forwarding. Using either of them will redirect every request and response directly to the host behind NAT.

Why can't you use STUN server? Unfortunately, even STUN server fails to initialize session if one or both clients are behind Symmetric NAT.

8
UDP hole punching NAT port
3
Is it possible to brute force search/guess symmetric NAT port prediction for hole punching?
2
Is a brute force UDP hole punch possible if both external IPs, and both internal ports are known to each client?
3
NAT based on destination port number
10
What do these three options in a Cisco Router NAT configuration mean?
5
Does the NAT source UDP port depend only on src ip/port?
4
Inbound NAT - masquerade as router?
3
NAT simultaneous tcp connection Open
0
Why does NAT keep track of each packet not just connections?
1
How can I use scapy to make a port appear open-device behind NAT?