Phased implementation of a new firewall

We have a number of machines spread across 13 /24 subnets. Presently we have a fairly dumb router that allows the routing of traffic between these subnets. This is not a firewall and it does not track state.

We wish to replace the router with firewalls (a pair of Juniper SRX 345s in a VC). This isn't a particularly easy process as once you start tracking state, you have idle connections timing out.

The applications aren't set up to deal with this and, this, migration to these new firewalls needs to be gradual. We cannot just rip out the routers and assign their IPs to the firewalls.

Add a static route for machine A, on machine B, via the new firewall. This works fine, except it's a nightmare to maintain as this would need to be done on every machine that communicates with those machines which have been migrated.

Add a static route for machine A on the old router, via the new firewall. This poses a problem because the route will (usually) send the return traffic into the firewall on a different interface than it came out of. As I understand it, Juniper SRX devices track firewall states in zones (which are a set of interfaces) and return traffic will not match a state (and thus will not pass) unless it comes into the same zone. We have 1 zone per subnet.

Presumably people have implemented firewalls into existing networks before. What's the solution here?

As mentioned in the comments, I think there should be no problem if you create a single zone on your FW for the "old network", i.e. like this (for simplicity I've only shown 2 subnets/vlans): 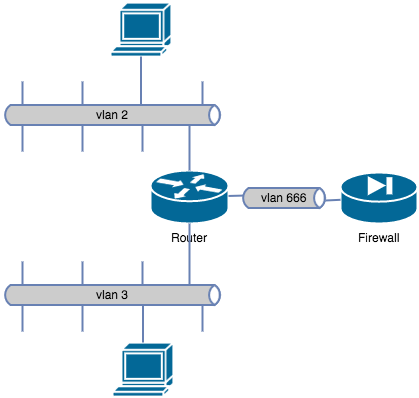 Then when you migrate one subnet to the firewall it becomes like this: 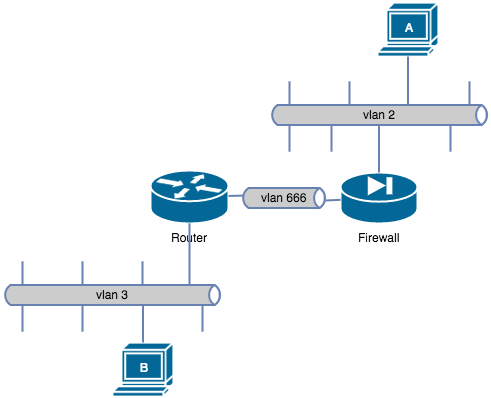 I don't see any asymmetric routing here (traffic enters and leaves the correct FW interfaces); is there any other problem here?

Not the answer you're looking for? Browse other questions tagged routing firewall juniper or ask your own question.

9
JUNIPER: Why is OSPF adjacency breaking when I enable FBF on an OSPF interface?
4
Does normal packet flow within a virtual router in a PA firewall require a rule?
2
How to create a dynamic route to firewall?
1
Two IP ranges, one ISP, one connection, one firewall/router
0
Juniper SRX to core switch and distribution. Transparent (L2) mode vs. routing mode
2
BGP between two SRX210s?
2
Juniper SRX 1400: Policy to redirect users to custom URL
1
Return traffic for nonzone interfaces in Cisco IOS (ZBFW)
1
how do you see what traffic is being forwarded to a static route?
2
Juniper SRX sniffing