Both region A and region E have a similar deployment scenarios: - 1 x 5508 WLC - several LWAPs in the existing network (local network). - FlexConnect for other several LWAPs for the spoke zones A for the A1 and E for the E1.

I'm thinking how can I achieve a backup solution for all these 4 sites: - A1 and E1 can achieve it through FlexConnect and one mode only: local switching & local authentication. - what about A and E regions? How can I bring some backup WLC solution here? I know of Mobility Groups, still I don't think it helps too much as I have only L3 connectivity between A and E region through MPLS. What if I try and get L2 connectivity in between using some solutions like "poor-man's EoMPLS" like L2TP v3, I will be able to connect one VLAN pair, will this be enough ? - what else can I do in case of WLC breakdown in either of the two regions (A or E)?

There are two main options for controller redundancy in Cisco's current wireless offerings. You can either use Backup Controllers or High Availability; depending on the firmware level of your 5508's, your acceptable failover time, and your budget.

Based on your question, we're working with the following topology: 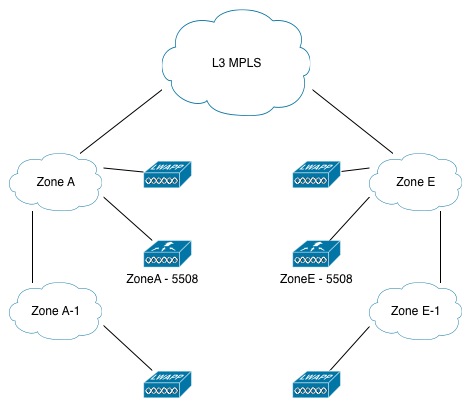 Traditionally, utilizing Backup Controllers was the main way to provide redundancy for a WLC failure. For Zone A, you could just select the Wireless LAN Controller at Zone E, and assign that as the Secondary Controller for each AP as desired. You can set the Primary and Secondary controllers for the AP on the controller via the GUI, the CLI, or even SNMP as pointed out by Mike Pennington's answer to this question. With Backup Controllers, in the case of a WLC failure AP's would begin to search for their Secondary Controller and re-establish their CAPWAP tunnel. The obvious downside to this, is the outage that occurs from the client prospective while the AP drops it's tunnel and begins to build it again to the Secondary Controller.

In response to the need for a somewhat better failover scenario, Cisco brought out High Availability in WLC firmware 7.3. In this scenario, you purchase a second WLC and license it specifically to serve as a standby. You place it adjacent to your existing WLC, and it shares an IP address and session/Config/AP information with the main controller. Now in the event of a WLC failure, the failover from the AP perspective is intended to be transparent. (As with all new features, and wireless in general in my experience, your milage will vary. However, in some of the newer code revisions, the failover is supposed to be getting nearly transparent to the AP and the client.)

Now with all of that said, which is better?

Backup Controllers is the cheaper way if your existing 5508's at Zone A and Zone E have enough available capacity to carry the load of either site, and your business can tolerate a few minutes of downtime in the event of a WLC failure. In that case, simply configure your secondary controllers on each Access Point, and off you go. Note that there is some more management overhead with using Backup Controllers, you will have to configure VLANs/Interfaces for all of your SSID's in each zone, make your AP Groups on each controller if you use them, etc. Now, when the WLC goes down at their site, users will experience some downtime as the AP's migrate, but at least they're not down hard.

Also, I wanted to clarify some of what you mentioned at the end of your question.

Mobility Groups can be used over a L3 connection, but Cisco's Mobility feature is for allowing seamless client roaming across AP's connected to different controllers, not to give you redundancy in the event of a WLC failure.

Flexconnect (formerly HREAP) is not entirely intended to help you with WLC failure, but with loss of network connectivity to a remote site. The end result is the same, the remote AP can't connect to it's controller, however it is important to think of the failure scenario it is created for. If you're only trying to solve the WLC failure scenario, you don't need Flexconnect at your remote sites, you can just use either Backup Controllers or High Availability. However if you ARE trying to solve the network isolation failure scenario, by all means, check out Flexconnect.

EDIT: In response to your two questions in the comments below:

1) You are correct, assuming there is complete L3 reach-ability between Zone A's subnets and Zone E's subnets. If, for example, you have configured Backup Controllers for the AP's in Zone A. Then, if an AP loses it's connection to the WLC in Zone A, it will look for the WLC in Zone E directly across the L3 connection. Upon reaching it, it will begin the CAPWAP join process.

2) You are correct that the process involves:

Now, if you've done that at Zone A and everything is working fine there, you can either do that process all again over on the WLC and switch in Zone E, or use your existing VLANs/Interfaces on Zone E.

Either way, the VLAN's/IP Addressing will be different between the two zones, but as long as the SSID's/AP Groups correspond between the two controllers, it doesn't matter to the WLC/AP/Client what VLAN the traffic uses. (It might matter to you, for managment/traffic separation/routing purposes, but the WLC doesn't care what VLAN it puts traffic out onto from a particular SSID.)

Edit 2: Attempting to clarify the VLAN assignment per WLC in each Zone per comments below:

Per your example in the comments, imagine that the WLC in ZoneA is serving two VLANs/SSIDs to your wireless clients:

And the WLC in Zone E is also serving two VLANs/SSIDs:

Now, depending on your network configuration, this could be perfectly acceptable. It could possibly not impact your users at Zone A at all for them to now have an address from Zone E. As long as the normal resources they connect to in Zone A, or wherever on your network, are available to the 10.1.0.0/24 subnet over in Zone E. However, if you have anything configured on your network, (ACLs, Web Proxies, etc,) that require the clients at Zone A to have an address in the 10.0.0.0/24 subnet, then we have a problem.

At this point, you would have several options. You could look at allowing the 10.1.0.0/24 Zone E subnet to access those resources (but if there are restrictions in place, they are likely there for some infrastructure or security reason). Or you could extend some sort of L2 tunneling across your MPLS connection so that VLANs 10 and 20 from Zone A can also live in Zone E. This creates it's own problems and wherever possible I try to refrain from tunneling L2 connectivity all over creation.

My recommendation however, should you find yourself in the scenario where users from Zone A MUST have addresses the 10.0.0.0/24 subnet, would be to look into simply placing a second WLC in Zone A. It is, by far, the simplest solution to that particular problem.