Regarding traffic blackholing in case of vpc and hsrp

From the cisco docs i have:

"vPC and HSRP/VRRP Object Tracking As Figure 67 suggests, it’s important not to use HSRP/VRRP link tracking in a vPC configuration. Assume HSRP/VRRP object tracking is configured on both vPC peer devices and L3 uplink failure occurs on switch 7K2. This event triggers the HSRP/VRPP object tracking and the resulting SVI with associated HSRP/VRRP configuration is set to DOWN state. So everytime 7K2 receives a frame destined to HSRP/VRRP vMAC, it bridges this frame over vPC peer-link because the other vPC peer device is able to process this frame (as SVI with associated HSRP/VRRP configuration is still in UP state). Using vPC with HSRP/VRRP object tracking may leads to traffic blackholing in case object tracking is triggered: the reason is that vPC systems will not forward a packet back on a vPC once it has crossed the peer-link (because of the vPC loop avoidance rule), except in the case of a remote vPC member port failure. " Refer the attached image: 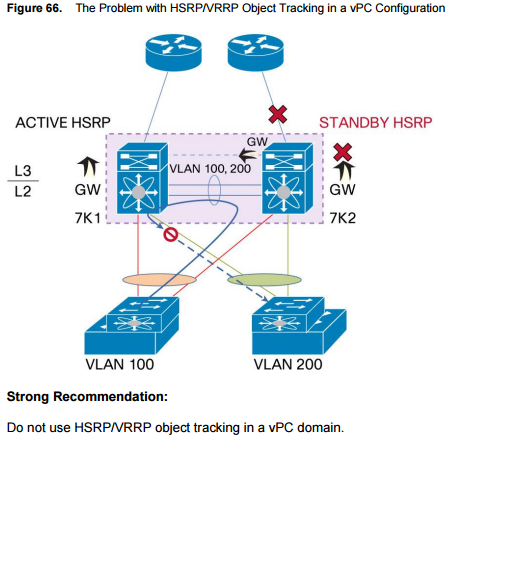 Q1: Why would the resulting SVI with associated HSRP/VRRP configuration is set to DOWN state if the uplink goes down? From what i know, we can only change the hsrp priority if tracking is triggered?

Q2:I am unable to understand, why the traffic blackholing occurs? Assume, there is a PC in vlan 100 at access layer and it wants to ping the far end router (the uplink router), i guess the traffic can still reach this router(via the vpc peer link, then 7k1 and then far end router)...will there be an issue in return traffic? )(I know the vpc loop avoidance rule which says that traffic received on a peer link will not be sent to any member port--but i don't undertsand how that applies here)?

Suppose a PC in VLAN 100 sends a packet to a PC in VLAN 200. Let's say the packet takes the VPC link to 7K2. Since the active SVI is on 7K1, the packet is forwarded across the peer link to 7K1. 7K1 would want to forward it to the right-hand access switch, but it can't because of the loop avoidance rule. So the packet gets dropped.

After discussion with my colleague, assume If uplink 7K2 down, it means Nexus cant send packet to uplink to router. So maybe, administrator add 1 policy EEM to shutdown SVI when object tracking is down state.

Not the answer you're looking for? Browse other questions tagged hsrp vpc or ask your own question.