Restructure my network without breaking connections

What I want to do may be pretty simple but I'm not very experienced with networking. I'll use pictures to explain, this is my current setup:

I want to extend my network so that I can add more devices, but because of the physical disposition of my devices I can only do so in the port used by device B of my current setup. 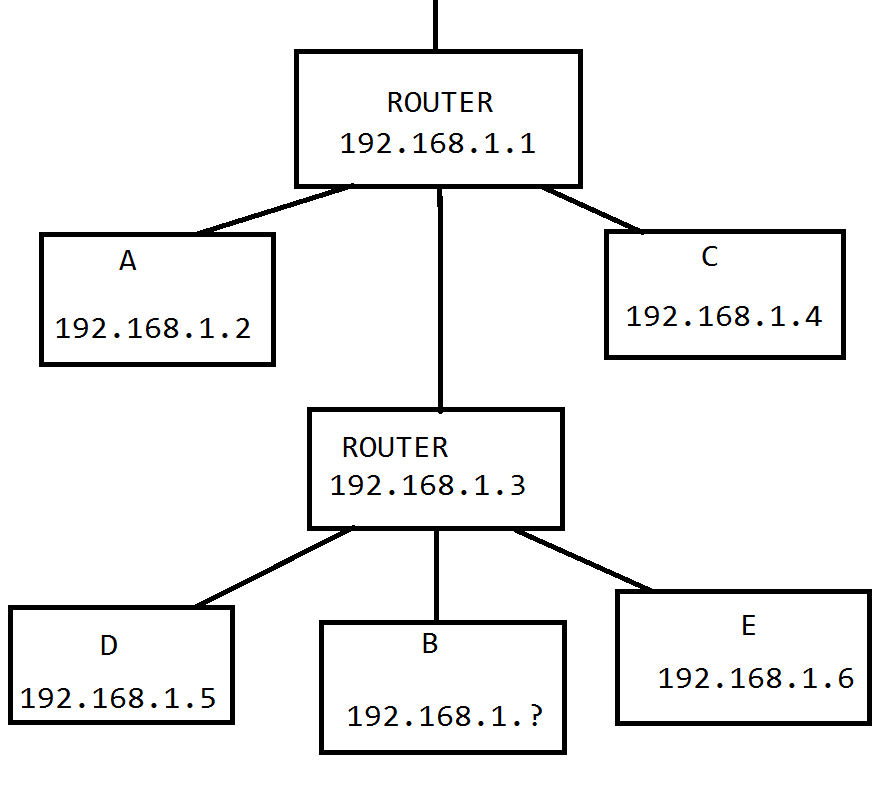 Unfortunately I have services running on device B and I need to persist its LAN IP, which I suppose I can easily do by just forwarding the used ports from the newly added router to the device's new LAN IP?

My first question regarding this setup is is my above statement correct?

My second question is How can devices from the outer (first) network access devices on the inner network?

If device A tries to connect to device D for example, wouldn't looking up 192.168.1.5 fail because the outer router doesn't have such an address?

The second router can not have the same IP addresses (same subset) for both host and the other router. What you need is to replace the second router with a switch and your problem will be solved.

In your case, Babak is right, but didn't fully explain.

Are you sure you want a router for that operation? Have you considered using a switch instead?

Essentially, a router is designed to route between disparate networks. It's designed so that you can take network a and access it from network b, and vice-a-versa. The problem you are going to have is that the typical home routers use NAT (Network Address Translation) to allow multiple devices to use the router to connect through one public IP. The public IP for router 2 is going to be 192.168.1.3. This means that you cannot have any 192.168.1.x devices inside that network (assuming you used the default subnet mask of 255.255.255.0 for a class-C network everywhere, which is highly likely). So in this case, you have two options:

Personally, I would go for option 2. There's no need to segregate your networks like that (unless you want an additional firewall to device B, but you probably don't need it).

TLDR: keep it simple and use a switch as Babak and EBrown have already suggested.

Using a SOHO router as a switch by disabling the DHCP service should work, however, might cause headaches later if it gets accidentally reset (not entirely unlikely if it's not on a UPS). You could end up with conflicting gateway IP, overlapping DHCP scopes, subnet with no internet connection, etc. These are not trivial to diagnose if you don't know what to look for.

Also, leaving the second DHCP server enabled on purpose might work for business class devices, however, it's probably not possible here b/c SOHO routers typically assign themselves as the gateway (and sometimes as the DNS server) without any option to change.

Save yourself future headaches with a small investment in a switch.

This should have been a comment, but not enough rep yet ;-)

Not the answer you're looking for? Browse other questions tagged lan or ask your own question.

2
Multi access point setup for connecting ~150 devices(smartphones) to the same wifi local network
0
Finding a device in a LAN having multiple routers
2
serial Connecting two network wall sockets
0
Monitoring IBSS (ad hoc) networks
1
Sending packet through LAN cable to another PC having ip of another network
0
Can I set up a WLAN with a WAP but without Internet?
1
Will devices with static addresses, will be disconnected when DHCP Server is changed?