I have been wondering for a while about this.

On Cisco switches you can configure a VLAN and nest private community and private isolated VLANs into it. You can also configure promiscuous ports that can be accessed by any member of the child VLANs. I know members of one community VLAN can communicate to each other without a need for a gateway and they can't with a different community VLAN. Also there's isolated VLAN members of which can only communicate with promiscuous ports. My question is, how does it work if I want to still reach another host from the same isolated VLAN I am in? Does the router still get you there? (So that's the question number one)

But if so, what about VACLs then? If I understand correctly, they prohibit getting out of VLAN and getting back or do they just restrict sitting in a VLAN with incorrect prefix/mask? (Question number two) 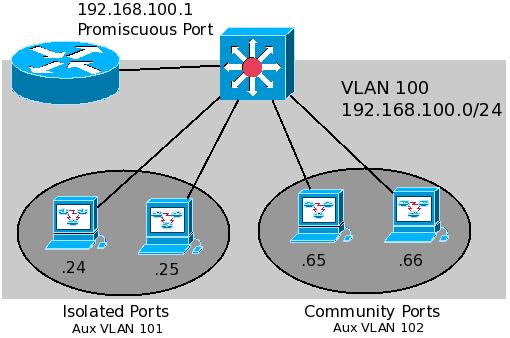 So I wanted to ask how for example I can get from host .24 to host .25 or from host .66 to host .24 (Between AUX VLANs)? I am confused about the routing happening. I know you cannot access them via layer 2. So how do these PCs get there? Do they still use the router? How does the router handle this? I mean, it's the same subnet, but that's different aux. VLAN.

Sorry if that sounds confusing at all.

VACL's are a completely different mechanism and provide some measure of per-packet (and usually protocol based) control of traffic bridged within a given VLAN. You might, for instance, block traffic on TCP/80 between all hosts within the VLAN while allowing all other traffic to pass.

It's possible to approximate the effects of PVLAN's by using a VACL but this tends to be somewhat fragile, difficult to manage and there are often inherent hardware limitations with which to contend (...highly dependent on platform).

Not the answer you're looking for? Browse other questions tagged cisco vlan private-vlan or ask your own question.