I wanted to configure Multi area OSPF between these routers. I created test simulation on packet tracer.

Can any one help me how I can do that because I am bit confused about the configuration in Mesh topology.

In single area all things and fail-overs also working fine, but when I tried to configure multi-area network, I am getting confused that where I configure which area. Because every router is connected to each other.

@John, If I not put my complete thing in Area 0, this could be the possible topology? Can I achieve my goal with this?

One of the conditions to create a successful relationship with a neighbour is that the area id must match, which it would never do in your design.

See the picture below which might help you understand it better. 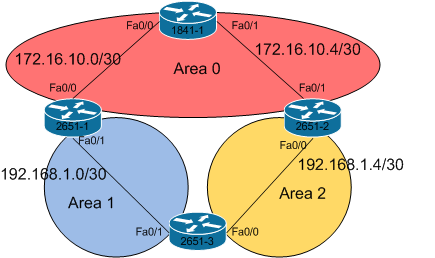 As you can see that the interface and its adjacent interface are both in the same area and not separate. This will allow a neighbour relationship to be established.

I wasn't able to paste this picture in the comments. Usually what you want is your full mesh connections to all be in the backbone area 0. Then you split off other stub areas that are all attached to area 0. So all of your WAN links would be in area 0, then the links on the router towards the local site LAN would be in its own area. 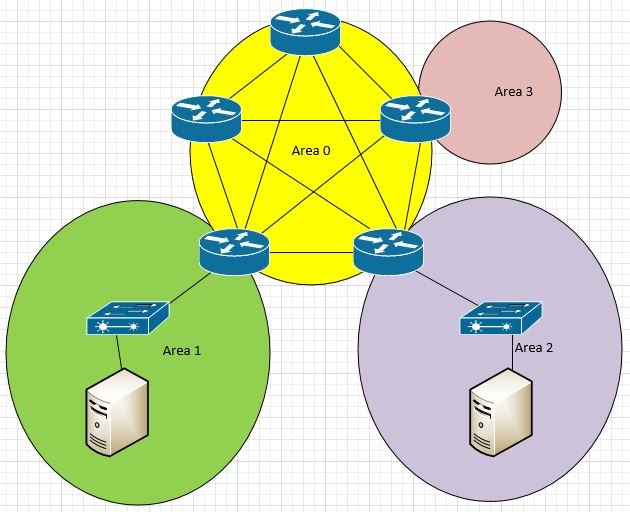 OSPF doesn't use a mesh topology. All OSPF areas must connect to Area 0 (backbone area) because all traffic from one are to another area must travel through Area 0. This is a loop prevention mechanism.

If, as sometimes happens, you have an area that cannot physically attach to Area 0, you must create a virtual link between that area and Area 0. Area 0 must also be contiguous, you cannot have two different Area 0s. You will need to implement a virtual link if Area 0 is split.

If you want redundant connections, then you need to have multiple connections from each area into Area 0.

The reason you cannot use a mesh with OSPF is found in RFC 2328, OSPF Version 2:

3.1. The backbone of the Autonomous System

The OSPF backbone is the special OSPF Area 0 (often written as Area 0.0.0.0, since OSPF Area ID's are typically formatted as IP addresses). The OSPF backbone always contains all area border routers. The backbone is responsible for distributing routing information between non-backbone areas. The backbone must be contiguous. However, it need not be physically contiguous; backbone connectivity can be established/maintained through the configuration of virtual links.

Virtual links can be configured between any two backbone routers that have an interface to a common non-backbone area. Virtual links belong to the backbone. The protocol treats two routers joined by a virtual link as if they were connected by an unnumbered point-to-point backbone network. On the graph of the backbone, two such routers are joined by arcs whose costs are the intra-area distances between the two routers. The routing protocol traffic that flows along the virtual link uses intra- area routing only.

When routing a packet between two non-backbone areas the backbone is used. The path that the packet will travel can be broken up into three contiguous pieces: an intra-area path from the source to an area border router, a backbone path between the source and destination areas, and then another intra-area path to the destination. The algorithm finds the set of such paths that have the smallest cost.

Looking at this another way, inter-area routing can be pictured as forcing a star configuration on the Autonomous System, with the backbone as hub and each of the non-backbone areas as spokes.

Not the answer you're looking for? Browse other questions tagged cisco routing router ospf or ask your own question.