How the Internet speed on PCs can be almost 100Mbps although the bandwidth of WAN is 155Mbps?

I thought a bandwidth is a number represent maximum amount of traffic. But it seems not.

Let me show the Network map in my company. 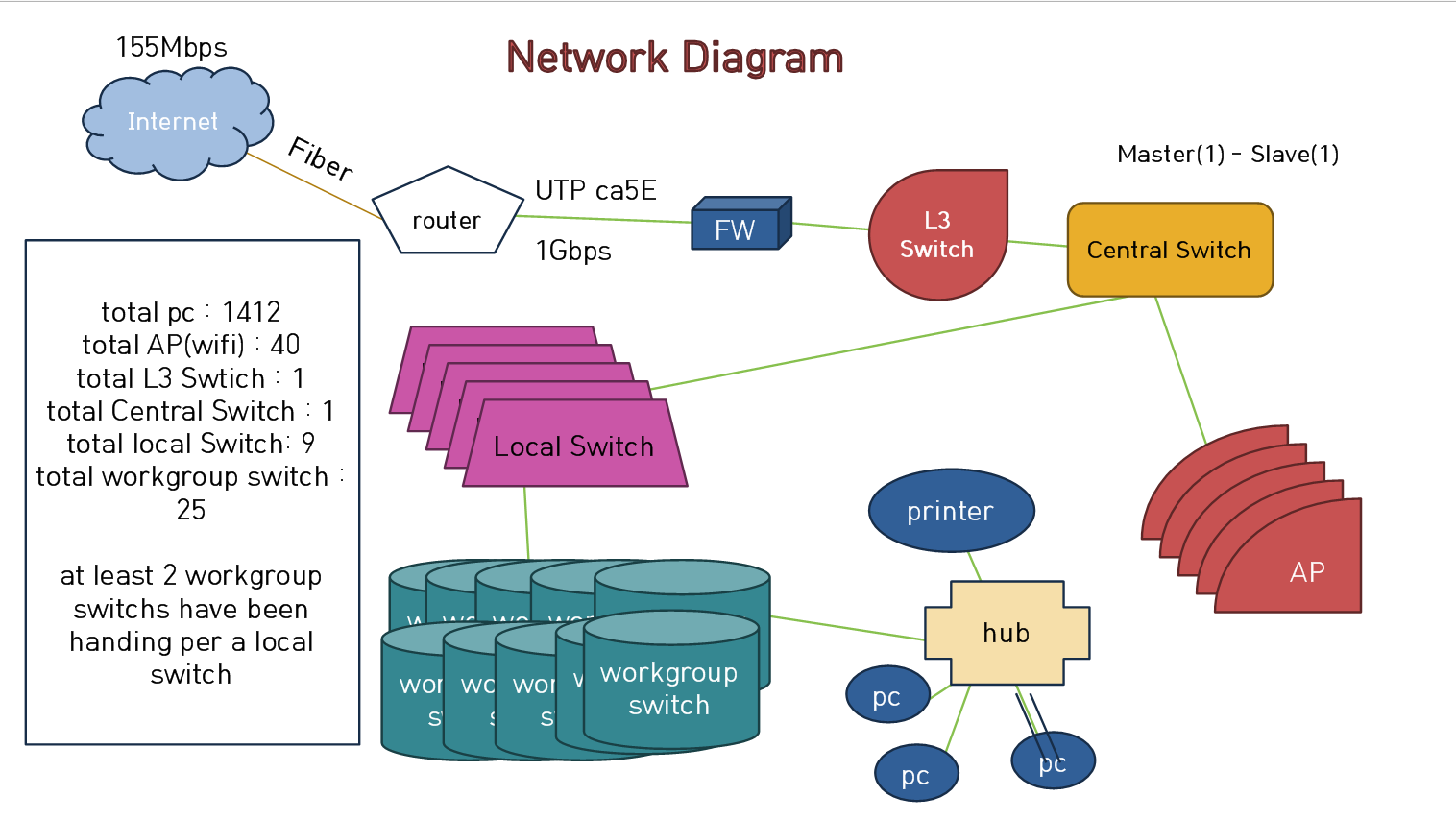 In this image. WAN has a 155Mbps bandwidth and there are a lot of PC and mobile devices. I tested network benchmark from 6 PCs at the same time. The result of min download speed is 91.2 Mbps and min upload speed is 88.7 Mbps. For this reason I wonder how this is possible or it works even though WAN has 155 Mbps.

I used Mbps as mega bit not byte.

It seems I gave you confuse what I want to know. I'm not good at English so It was my best But let me try more to explain specific.

I did't mean why the speed less than 155 Mbps even though the bandwidth of WAN is 155 Mbps.

There are many possibilities and substantial further testing is needed to narrow down which ones apply in your case.

One is that the speed test you are using only actually tests for a very short period, so although you think you are testing multiple machines at the same time you are not.

Another is that the speed test is downloading the test file from a cache in your network, not the internet.

Another is that the 155Mbps is not in fact a hard limit but a soft limit which is only enforced after it is exceeded for a sustained period.

Another is that your ISP only enforces the speed cap on traffic it considers "out of network" and there is a speed test server for the site you are using within your ISPs network.

Another is that your ISP simply forgot to set up the limit on your line. ISPs are run by humans who screw up from time to time.

Another is that your ISP is playing the "cheat at speedtests" game and this has resulted in speed test traffic bypassing the limiter.

WAN circuits can use physical circuits that are different speeds than the LAN connections used by hosts. It is possible that the hosts connect to workgroup switches at only 100 Mbps, despite the 1 Gbps connection between the firewall and router.

Also, the diagram shows a hub, and those connections are half-duplex. The hosts connected to a hub compete for sole use of the hub for each frame, and collisions will slow the effective throughput.

on 100 Mbps you can have 90Mbps throughput because of tcp syn/ack and re-transmission. (with udp you can have 100 Mbps)

if you want to test your SDH(WAN) link, you should use 4 PC. two pc in your company and two in other place. you sould use two iperf server and client in same time.

Hope that my answer will clear what you are asking: first of all lets talk about the speed test and what does it actually mean. When you do any speed test from any pc at your network (recommended to do the test directly from the ISP router)well,it shows the bit rate for the download direction that can be transferred from the pinged server to your pc and the upload speed will show you the bit rate from your pc to the pinged server. and when you do the speed test ,you are not actually using this data rate ,you are only sending the ping message and getting the response. but the real usage will happen when your pc and the other pcs in your network will try to actually download/upload data from/to specific web server.

Not the answer you're looking for? Browse other questions tagged switch internet bandwidth topology or ask your own question.

14
How to Monitor Vlan Traffic?
6
How can I view bandwidth use by ip/host on a Cisco router?
4
configuring for remote internet connection
5
How are ping times computed
1
Is bandwidth a sum of network speed each computer in sub network?
4
Differences between Enterprise internet connections with the same nominal bandwidth
6
Why is internet speed called Bandwidth?
1
What does the speed of Network Switch actually mean?
0
Bandwidth limit between CPE and Provider Equipment