In and Outbound Dual VRRP connections

I'm trying to setup a redundant route link for our internal network using brocade layer 3 switches. I have setup up VRRP on both the green/blue and red/black networks. The reason for doing this is to simulate an active passive pairing.

I thought about it and noticed one issue. If the red connection fails VRRP will work and switch over to the black network but the green network doesn't know this fail over occurred and could be the default path for network traffic.

I'm not sure what things I could do to prevent this issue from occurring. Is there a better way to implement them being an active passive pair?

The simple diagram of how the network is setup. 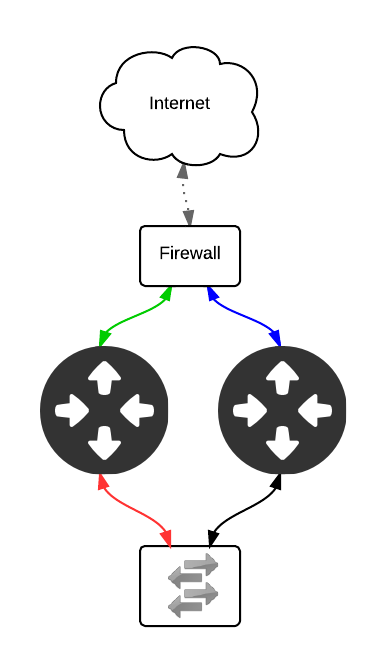 This is the logical view of what you're trying to achieve: 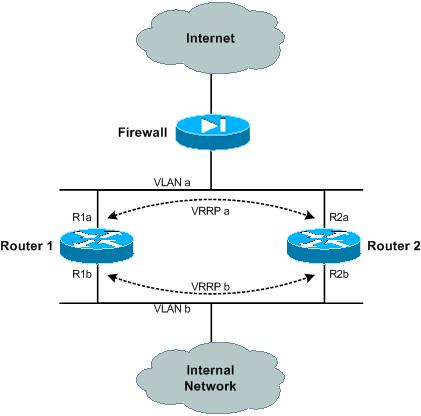 Configure the router priorities for both VRRP 'a' and VRRP 'b' as follows:

The configure interface tracking as follows:

In addition, because interface R1b has gone down, then the VRRP hello packets will fail across VLAN 'b'. This will be detected by Router 2 (after failing to receive a hello packet within the dead timer interval), at which point it will take over mastership for VRRP 'b'.

If interface R1a goes down, then in a similar fashion, Router 2 will take over mastership for both VRRP groups (Router 1 VRRP 'b' priority = 90, and the VRRP hello packets will fail across VLAN 'a').

If either interface R2a or R2b goes down, then Router 1 will continue to be master for both VRRP groups.

Note that the priority value I've chosen above are quite arbitrary -- you may want to choose different values. Also, if the VIP address of a particular VRRP group is the same as the interface address for one of the routers in that VRRP group, then that router will automatically take a priority of 255 (i.e. it will always be the master unless that interface goes down). 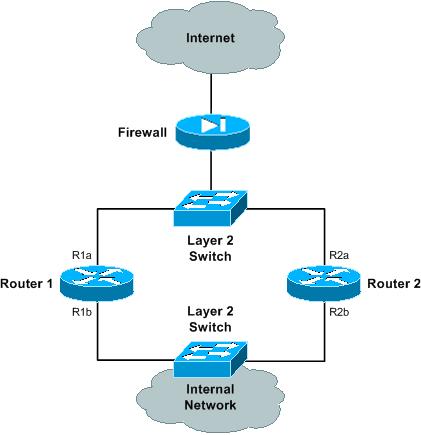 You can read up on VRRP on Wikipedia here:

You are really looking for the Brocade Track Ports and Track Priority features.

With these features configured, when the red connection fails, it will lower the priority of the green connection. This should then allow the blue connection to take over as master in the group.

Personally, I would also add a direct link between the two L3 switches as well.

You may also want to consider running a routing protocol between the two L3 switches and the firewall, if they all support one (such as OSPF), rather than VRRP. However that may be overly complicated (not many details about your environment, equipment, staffing or the level of redundancy you hope to ultimately achieve).

Not the answer you're looking for? Browse other questions tagged brocade redundancy vrrp or ask your own question.