Is this topology loop free?

I have the following topology:

I intend to build this network with the PC acting as a DHCP server and multiple IP-enabled custom development boards connected to the switch and some connected to each other for network redundancy. By design, each dev board has two Ethernet ports and retransmits data received on a port to another.

I am worried that the connections between the dev boards could generate loops.

Can this topology be used without existing the risk of loops appearing? How? Does the switch automatically recognize the connected devices (MACs) and avoids loops?

Switch uses Layer 2 Spanning Tree Protocol to ensures a loop free topology for any bridged Ethernet network. So if yours IOT device will forward bridge protocol data unit (BPDU) accross, switch will maintain loop free topology. BPDU are transsmited accross local network to detect loops in network topologies. If BPDU won't be forwarded you can possibly have a loop. But effect of STP could be something like on this picture. 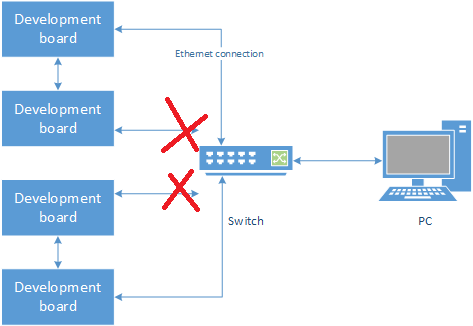 So two IOT boards would be able only to talk with DHCP server thru another IOT board.

Not the answer you're looking for? Browse other questions tagged switch topology loop or ask your own question.