Building too large for ethernet runs

I'm pretty new to network design. I know enough to wire small buildings and such, but I'm puzzled as to how work this one out.

A building I'm working on is an odd shape, and very large. Unfortunately, it is too large for standard cat5e. I certainly wish I could run fiber, but that is not in the budget. I have received multiple pieces of advice for running this building, one being multiple switches using STP or inter-VLAN:

My question is: Is this the best possible way to wire cat5e, and if so, how much will it impact a gigabit network?

EDIT: I was asked to provide the layout of the building: 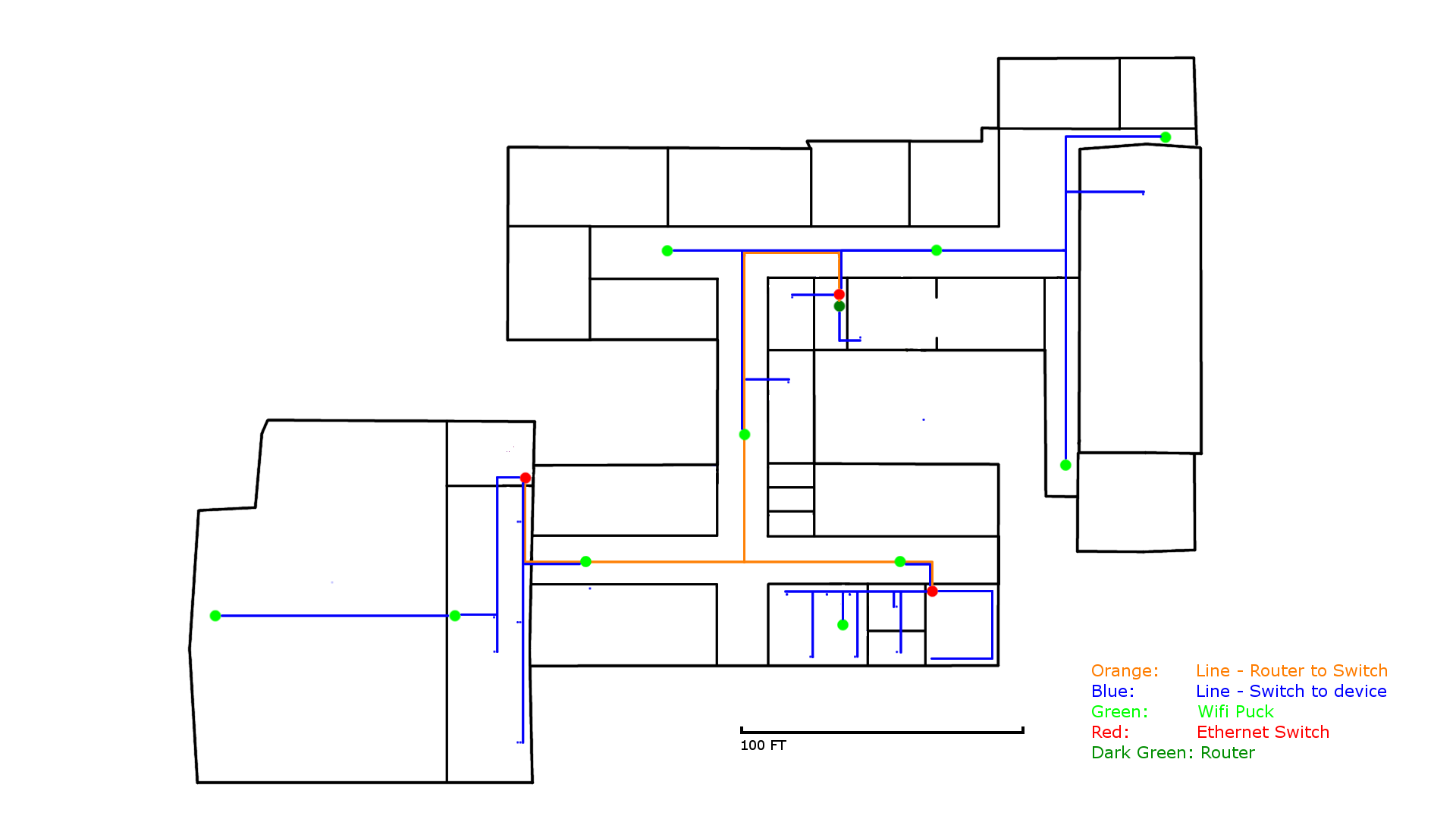 The red points are all available to be used for networking. Unfortunately, from each individual point, the opposite end of the building is greater than 300ft away. The walls are also cinder block up to the ceiling, so running through walls is not an option. The picture shows what I had planned to wire.

Thank you all, by the way, for suggesting cat6a, I was always told that cat5e was far cheaper, but a simple google search cleared that up for me.

The switches I am planning to use are the Summit X450E-24P. These do have SFP connections, however, they are still restricted to 1Gbs. Any suggestions on utilizing fiber to connect them? I could certainly aggregate a few lines, then trunk over to the other switches, but that could be done just as easily with cat6a.

Fiber is not so expensive unless you are getting fleeced. Indeed, it can be cheaper than copper cabling. It's also the right solution to long runs.

Given the installation costs, it's likewise foolish to install 5e rather than 6A at this date and into the future for copper. The cost of the cable is a tiny fraction of the cost to get it installed correctly. With 6A your inter-switch links can run at 10Gb, even if your drops are only running at 1Gb. But your inter-switch links should really be fiber.

If you are stuck with a penny-wise, pound-foolish corporate mindset, drop in a switch every 100 meters or less. Throughput from [everything on a switch] is going to be limited by what the switch uplink speed is, to the extent that more than one thing on a switch wants to pass data up or down the uplink.

Commenting on topology without some sort of sketch of the building and knowledge of what other PWPF limitations on common sense are in effect is shooting in the dark.

If more than 100 meters, you need fiber to make the link. If less, copper is an option, but fiber is a superior option. If you limit yourself to that particular switch model, 4 fibers (2 links, aggregated) from each remote switch to the switch at the router is all you're going to be able to manage. Use 12 fiber cable anyway, it's not much more expensive if you shop well. A different switch at the router might offer you 8 SFPs and aggregating 4 links to the other switches, but changing all three to a switch model that supports SFP+ would be 2.5 times better than that...

Of course, if you don't actually have things like local file servers and this is all connected to a 50, 100 or 500 Mb (or even 1Gb) internet uplink, and nearly all network traffic is from or to the internet, not between local devices (or not with large data between local devices) this may not be a bottleneck in practice, as the internet connection will be the limiting factor. When looking to optimize a network I tend to try and eliminate bottlenecks on the assumption that if not now, at some point someone might hang a fileserver or database server off the network and it would be nice if the network worked well with that, but with a low-budget approach that may not be a current concern for your application - in which case a single gigabit link would be OK, though a dual aggregated link will offer minor protection from a cable disconnect. Connecting the distal switches with a normally STP blocked path will again offer minimal protection against one of them becoming disconnected, though in this layout a cable cut would be likely to take out both such links at once so the benefit is probably minor.

If cost is such a concern and your blue lines are fairly accurate, smaller switches might save quite a bit of money.

Going a bit further into why we push fiber: at 10 Gb, fiber transceivers are much more power-efficient than copper transceivers. Fiber is effectively immune to electrical noise, while copper is subject to it; the design of copper systems is intended to reduce such noise pickup, but that can be thrown off by pulling a cable too hard, bending it too tightly, or many other fiddly installation details. Fiber, particularly single-mode fiber, is effectively unlimited (itself) in terms of bandwidth; upgrades merely involve plugging in the newer, faster transceiver on each end, rather than replacing fibers in walls and ceilings. And, as mentioned, fiber is the only way to get past the 100m limit at full speed and without intermediate devices. But in your case, you seem to have missed that the "100m limit" applies to "cables between devices" not "overall size of the building" - when you get to a switch and go out another port, you start counting again at 0m from the switch port.

First, POE can be used on Ethernet cables at the full maximum cable length, which is 100m / 328ft (90m (295 ft) of solid "horizontal" cabling between the patch panel and the wall jack, plus 5 meters (16 ft) of stranded patch cable between each jack and the attached device).

I guess your issue is not POE but the Ethernet max distance.

Second, although CAT5e is still doing a great job, it's time to consider CAT6A.

Structured cabling, especially in a large building, is a huge investment that is supposed to last for 20 years. It is really, really not the thing you should restrict budget on.

I strongly advise consulting a specialized firm to do it. Home made cabling will lead you to many issues that will cost you much more than having it done correctly from the beginning.

Back to the question itself, the solution really depends on the building topology.
A typical way to solve great length issue is to have several distribution cabinets within various place in the building and have those cabinets linked together or to a central IT room with fibers links (which are really more future-proof than copper).

PoE, like ethernet, is limited 100 meters: 90 meters for solid-core horizontal cable, and a total of 10 meters of stranded patch cables. If the building is too large for PoE, it is too large for ethernet.

The proper solution is to build another TR (Telecommunications Room). You can use a fiber backbone cable to connect your two TRs, and run horizontal cableing from both, covering the building. You can add multiple TRs, if necessary.

I think you got some really good answers above and the thoughts below are additions to what is already posted. Mainly, these are thoughts regarding "future proofing" your work so you dont need to revisit it any time soon.