How would I formulate an "ip route" command in order for two non-adjacent routers to communicate?

I am doing static routing to connect computers over three routers.

Here is my scenario: 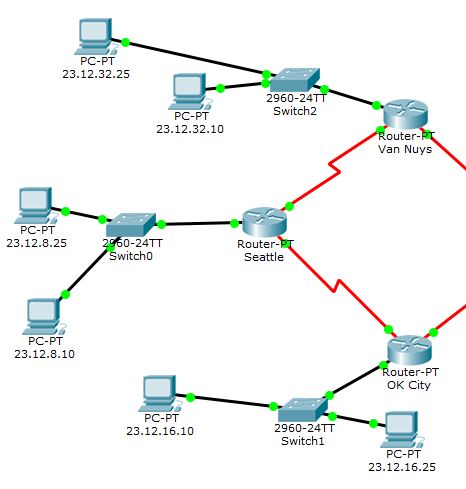 My trouble now is figuring out how a host on Van Nuys can successfully ping one on OK City. Could such a thing be possible using this configuration or would I have to add an additional serial cable that goes directly from OK City to Van Nuys? If so, what would that look like?

Simply add routes to the networks on the other side of the other router. You did that already for some of your routes, but you need to do it for all of the routes.

Static routes don't scale. You should really use a dynamic routing protocol in common with your routers.

You obviously created static routes on your routers in order for a host on the Van Nuys network to be able to ping a host on the Seattle network. Something like:

Not the answer you're looking for? Browse other questions tagged cisco routing router subnet packet-tracer or ask your own question.

2
Need Help Drawing Topology in Packet Tracer
3
Computer unable to ping another over two routers
5
Why can't two hosts (in two different logical networks) connected to each other through cross-over cable communicate?
1
Packet Tracer help, dropped packets and connectivity issues
0
Why computers can communicate on different networks and routers won't?
1
how do i connect two networks with two routers in packet tracer?