Ultimately what I want to do is connect a second physically separate gateway, and assign its WAN port one of the public IP addresses given by our ISP.

So I have the following setup currently and is working.

While this works and the new device talks over the public IP address, the actual gateway thinks it's public IP address is 10.61.1.6, not xxx.xxx.xxx.105. This make configuration of VPN serves impossible for me as the device is wrongly thinking its public IP is a private one.

To clarify, which is my understanding, I might be wrong, the ISP gateway is xxx.xxx.xxx.98 on a /30 network and have given us a /29 block of IPs that are routable through xxx.xxx.xxx.98/30. From my testing the above rules out being able to connect a switch between the ISP box and pfSense WAN and just assign devices those public IPs of the /29 block.

Is there any way I can configure the WAN port on the secondary device with the public IP address, connect it to pfSense someway and just get pfSense to route it out to xxx.xxx.xxx.98?

I found my answer in the pfSense The Definitive Guide Version 2.1.

Some ISPs will give you a small IP subnet as the "WAN side" assignment, and route a larger "inside" subnet to your end of the WAN subnet. Commonly this is a /30 on the WAN side, and a /29 or larger for use inside the firewall. The provider's router is assigned one end of the /30, typically the lowest IP, and your firewall is assigned the higher IP. The provider then routes the LAN subnet to your WAN IP. You can use those additional IPs on a routed interface with public IPs directly assigned to hosts, or with NAT using Other VIPs, or a combination of the two. Since the IPs are routed to you, ARP is not needed, and you don't need any VIP entries for use with 1:1 NAT. Because pfSense is the gateway on the OPT1 segment, routing from OPT1 hosts to LAN is much easier than in the bridged scenario required when using a single public IP block. Figure 10.25, “Multiple public IPs in use — two IP blocks” shows an example that combines a routed IP block and NAT. Routing public IPs is covered in the section called “Routing Public IPs”, and NAT in Chapter 11, Network Address Translation.

So I made a spare interface OPT1 and assigned it one of the public IP addresses. Hung a small five port switch off OPT1 and plugged in my servers to it. The servers were then assigned a public IP address with the gateway set as the IP of OPT1. With this, I had to sacrifice one of my public IPs but I was able to directly assign a public IPs to servers on OPT1. At the same time, I was able to continue to use the rest of the spare public IPs as I did before with 1:1 NATs through to servers sat on the private LAN.

The rest of the setup was just setting up firewall rules to allow OPT1 <--> WAN. 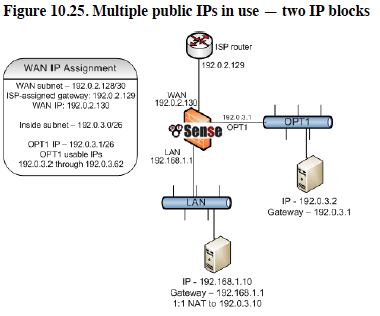 As noted in the manual here: https://docs.netgate.com/pfsense/en/latest/interfaces/using-public-ip-addresses-on-an-interface.html

So in my opinion you should you one of your allocated IP range as your VIP instead of xxx.xxx.xxx.105/29

Not the answer you're looking for? Browse other questions tagged ip pfsense or ask your own question.

4
Setup IPSec VPN to a node behind another Pfsense Box
4
Using a public IP for select hosts in a LAN
2
Port Forwarding on unavoidable Double-NAT pfSense
0
PFsense - Reach via NAT and Proxy ARP destination behind the same firewall without the system knowing the RFC1918-IP
5
pfSense & VMWare ESXi VLAN integration
2
problems routing WAN with private IPs and LAN with public IPs
0
How to forward port 80 and 443 on pfSense to a (internal) nginx webserver?