How IP helper address works and what is the difference between dhcp and IP helper-address .please explain in brief.

Using the ip helper-address command sets up a DHCP relay. DHCP only works on the LAN to which it is connected because it uses broadcast, which cannot cross a router. To remedy that situation, DHCP relay was created. It gives DHCP an option so that a router intercepts the DHCP client's broadcast request, creates a unicast request to the DHCP server on a different LAN, and the DHCP server can give a unicast response to the router based on the DHCP option, that then passes on the DHCP response to the requesting DHCP client.

To add to Ron's great answer:

The key piece of this is that the Router sending the DHCP request on behalf of the client will unicast the request with a source address from the address space the client is in (the interface the relay/helper-address is configured on). This is ensures the DHCP server offers an IP from the correct scope.

I realise this thread is pretty old now, but I've just been looking for help on IP Helpers and found this article very useful to explain IP Helper addressing, how it works and its general application in a network.

I didn't realise it was a Cisco-specific thing so spent quite a bit of time trying to find information on it from Microsoft.

DHCP is not the only critical service that uses broadcasts. Cisco routers and other devices might use broadcasts to locate TFTP servers. Some clients might need to broadcast to locate a TACACS security server. In a complex hierarchical network, clients might not reside on the same subnet as key servers. Such remote clients broadcast to locate these servers, but routers, by default, do not forward client broadcasts beyond their subnet. Some clients are unable to make a connection without services such as DHCP. For this reason, the administrator must provide DHCP and DNS servers on all subnets or use the Cisco IOS software helper address feature. Running services such as DHCP or DNS on several computers creates overhead and administrative problems, so the first option is not very appealing. When possible, administrators use the ip helper-address command to relay broadcast requests for these key User Datagram Protocol (UDP) services.

By using the ip helper-address command, a router can be configured to accept a broadcast request for a UDP service and then forward it as a unicast to a specific IP address, as shown in Figure 2-21 below. Alternatively, the router can forward these requests as directed broadcasts to a specific network or subnetwork. 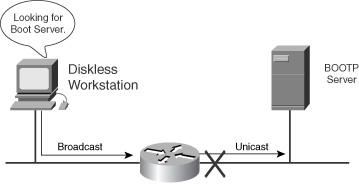 Configuring IP Helper Addresses To configure the helper address, identify the router interface that will receive the broadcasts for UDP services. In interface configuration mode, use the ip helper-address command to define the address to which UDP broadcasts for services should be forwarded.

By default, the ip helper-address command forwards the eight UDP services listed in Table 2-10 below.

What if Company XYZ needs to forward requests for a service not on this list? The Cisco IOS software provides the global configuration command ip forward-protocol to allow an administrator to forward any UDP port in addition to the default eight. To forward UDP on port 517, use the global configuration command ip forward-protocol UDP 517. This command is used not only to add a UDP port to the default eight, but also to subtract an unwanted service from the default group. When forwarding DHCP, TFTP, and DNS without forwarding Time, TACACS, and NetBIOS, the Cisco IOS software requires that the router be configured according to the syntax shown in Example 2-5.

Consider the complex sample helper address configuration shown in Figure 2-22. You want Host A to automatically obtain its IP configuration from the DHCP server at 172.24.1.9. Because RTA will not forward the Host A DHCPDISCOVER broadcast, RTA must be configured to help Host A. 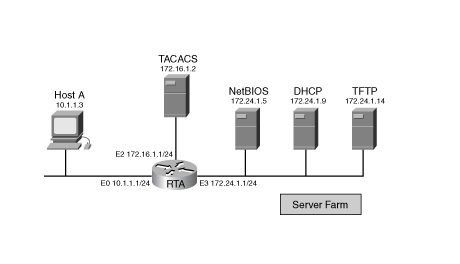 To configure RTA e0, the interface that receives the Host A broadcasts, to relay DHCP broadcasts as a unicast to the DHCP server, use the following commands:

Configuring a directed broadcast to the server segment, 172.24.1.255, is more efficient than entering the IP address of every server that could potentially respond to the Host A UDP broadcasts.

Finally, some devices on the Host A segment need to broadcast to the TACACS server, which does not reside in the server farm. Configure the RTA e0 to make it work by adding the command ip helper-address 172.16.1.2

Verify the correct helper configuration with the show ip interface command, as shown in Example 2-6.

Notice that the RTA interface e3 in Example 2-7, which connects to the server farm, is not configured with helper addresses. However, the output shows that for this interface, directed broadcast forwarding is disabled. This means that the router does not convert the logical broadcast 172.24.1.255 into a physical broadcast with a Layer 2 address of FF-FF-FF-FF-FF-FF.

To allow all the nodes in the server farm to receive the broadcasts at Layer 2, configure e3 to forward directed broadcasts with the following commands:

Taken, in part, from: https://www.ciscopress.com/articles/article.asp?p=330807&seqNum=9