I'm having my googlefu fail me. I have a rather complicated network that has grown organically that now is running a mix of IBM / BladeOS switches that are doing VLANs and MST for spanning tree, connected to edge HP Procurve switches of all vintages. I've worked out (more or less) a method to map the physical connections between 2 nodes on a VLAN.

My current question is this - say I have a network like this: 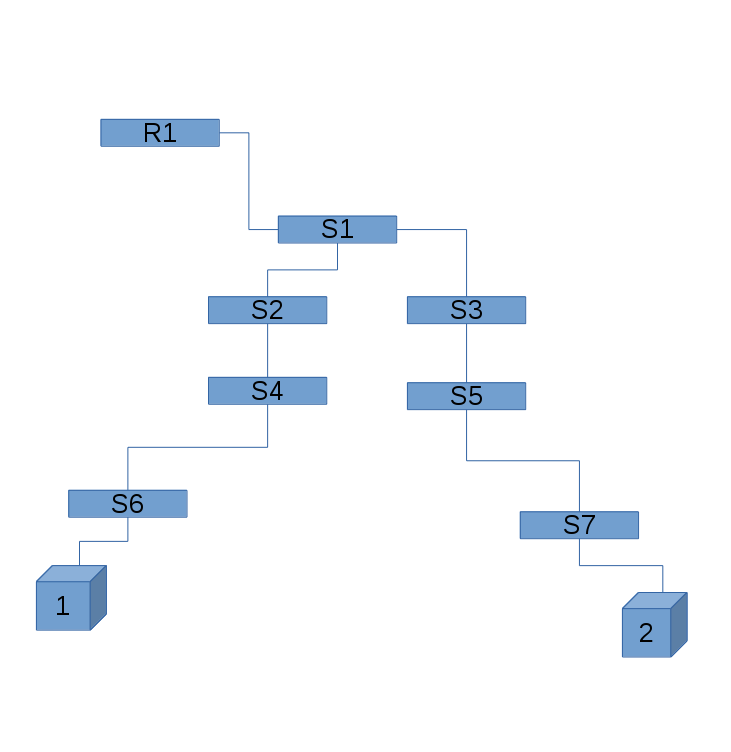 S4-7 = HP Procurve switches with no STP or RSTP only

If Node 1 wants to talk at L2 (all on same VLAN and subnet) to Node 2, if it sends out a frame on a fully learned network - what path would it take?

From what I can work out according to my reading and the videos I've watched, even though the human "obvious path" would be 1-s6-s4-s2-s1-s3-s5-s7-2

It actually has to go to the logical root bridge unless node 2 was also connected to s6 rather than s7 as it currently is. I.e. the ethernet frames from 1 to 2 actually also go through R1

Is this right? Or is the root bridge irrelevant here as we're staying in the same VLAN?

ethernet spanning-tree layer2
Share
Improve this question
asked May 24 '17 at 18:18

The frames from one host to the other will have a path toward the root bridge. At S1, you get a shortcut since S1 will have the MAC address of the destination host in its MAC address table, or it will flood the frame to all non-blocking interfaces, which creates the shortcut, too.

Assume that there is no S1. S2 and S3 are directly connected to the root bridge, and S2 and S3 have a connection between them. The frames will need to travel through the root bridge because the link between S2 and S3 will be blocked on one side or the other.

Switches learn their MAC table from the frames that run through them. Usually, IP's ARP (or NDP with IPv6) makes sure that all switches learn all MACs they need to know. When 1 sends a frame to 2 S1 already knows that 2 is located on the port to S3 and sends the frame that way.

The root switch is only important for (M/R)STP - since you've got no redundant links all links are forwarding and there's no STP blocking. STP protects you if e.g. S4 and S5 are connected by accident.

Once you do have redundant links, the choice of root switch will be important as (roughly) all switches will block frames to redundant ports facing away from the root bridge and traffic will flow more (not entirely) in the general direction of the root bridge.

Not the answer you're looking for? Browse other questions tagged ethernet spanning-tree layer2 or ask your own question.

13
Detecting different Ethernet frames
10
RSTP: Using switches in pairs to two switches?
5
How can I determine the STP designated bridge on Cisco IOS?
4
Spanning-Tree Interoperability between ProCurve core & Cisco access layer
1
Guidelines for network design of bladecenter
0
Minimum possible size of Ethernet/IGMP frames
1
Clarification on when routers encapsulate and decapsulate packets
0
What is the impact of VTP pruning against RSTP topology?
0
Ramifications of turning off Spanning Tree for EIGRP network?