I've been handed a project, and I'm familiar but not experienced enough to make a solid decision on this. I'm actually on the firewall side of things. We've lost our lead engineer and I'm wondering if someone can help with a sample of what would be the best setup for this. I know that OSPF would be for the LAN, and HSRP for failover between the routers on each side, but not sure about the rest of what the customer is wanting. I've included their write-up as well as the diagram:

The customer decided that it needed a redundant WAN topology to ensure that Minneapolis users have a secondary path to the main datacenter in Chicago. To do this, they purchased a private fiber line between sites. Currently, the private fiber is the primary path between Chicago and Minneapolis. Static routing is in place today to steer traffic over this line. The network director has decided that static routing is not the answer and in order to automate failover/failback between WAN paths, routing protocols should be leveraged. BGP is already in use with the MPLS provider between the CE and PE routers and this cannot be changed. You have control over all devices with the exception of the PE router. The customer has decided that eBGP, iBGP and OSPF can be used (one or a combination of all 3) and all static routes must be removed. Customer requires that the primary path be the Private fiber and secondary path be the MPLS. Minneapolis also needs to receive a default route from Chicago for internet access. 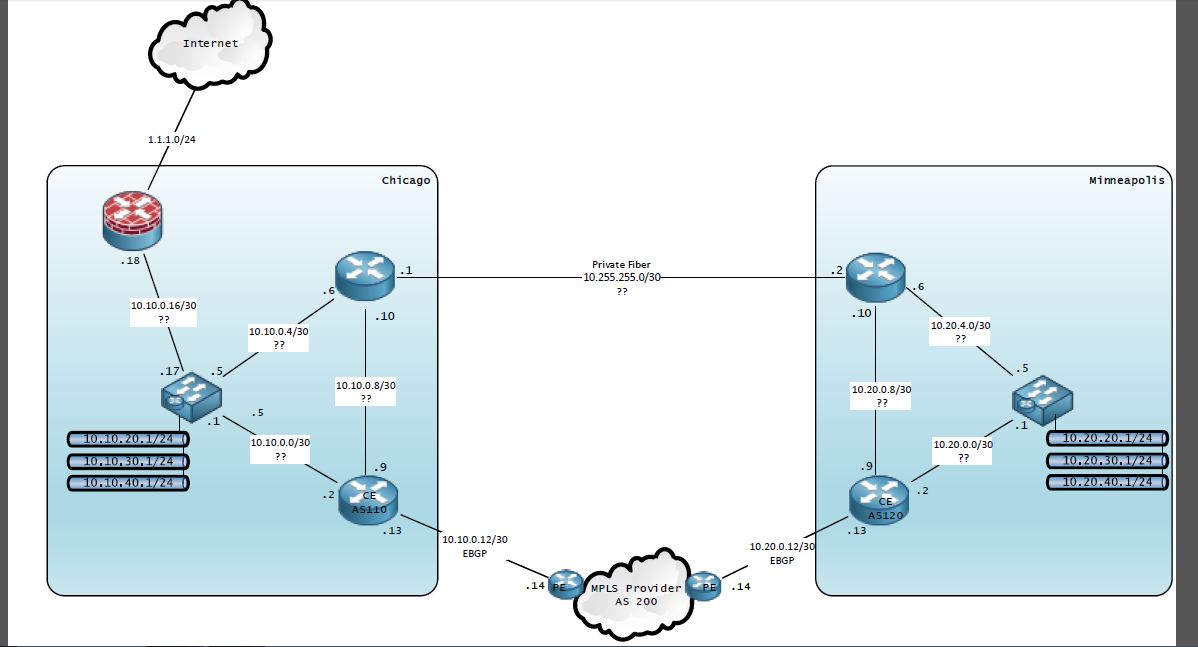 If you are running EIGRP over the leased line, then the routes over that link will have an AD of 90. If the routes from the PE come to the CE via iBGP, then the AD will be 200 for those. The routes received from EIGRP will naturally be preferred over those received from iBGP. That means that your scenario will work out without any changes or routing policies, and the network should fail over from the leased line to the MPLS connection automatically, and go back when EIGRP is reestablished once the leased line comes back up.

The same holds true for OSPF (AD 110) and iBGP (AD 200). The only hitch would be with eBGP (different ASes) which has an AD of 20 (lower than other routing protocols).

If, on the other hand, you are running EIGRP between the CE and PE as is shown in the drawing, then you can decrease the bandwidth or increase the delay (really only labels) on the CE interface toward the PE, and you will then prefer the routes received from the leased line.

Not the answer you're looking for? Browse other questions tagged cisco routing network switching design or ask your own question.

9
Remote Campus Routing Design
5
HSRP + OSPF over tunnel interface
8
How to failover static ipsec vpn tunnels?
9
How to provide failover for space-diversity T1
4
How to use secondary internet exclusively for one host?
3
How to design a good (small) OSPF network
1
Network redundancy design question with BGP
1
dual homing WAN circuits BGP
2
Failover with two ISPs, one with public and one with private addresses