What protocols/configurations do I need, for implementing my firewall zone based network?

I have two Cisco 1941 routers connected to a PA-200 firewall. Each router has a couple of switches attached to it. I want to implement this network. 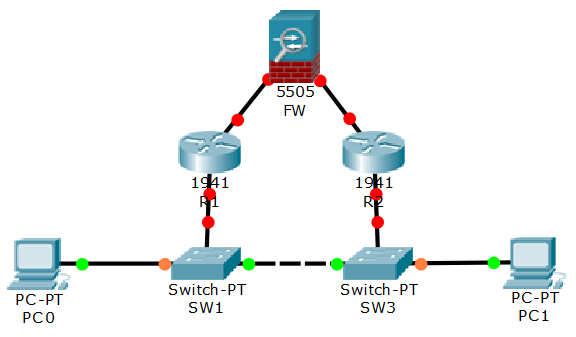 On the PA Firewall, I want to define access policies between different zones. All traffic inside the network needs to go through firewall, so it can decide for example, if a client from VLAN/zone 1 can send/receive packets from/to VLAN/zone 2.

The routers need to be redundant, so that PC0 can get to the firewall, even if R1 fails. It should then take the path SW1->SW3->R2->FW.

I honestly don't know how to configure it completely, which is something I'm trying to figure out by asking this question. Actually, there's three things I'm confused about.

Problem 1: How do I tell my cisco routers to forward all traffic to my firewall?

I can only guess that this has something to do with setting up a virtual router with an ip address that can function as a default gateway that the clients can use. However, I'm not sure that's going to work, because the PC probably won't be able to see the firewall's mac address since it's behind a router...

Problem 2: How to map my zones using only two physical interfaces (one for each router)?

I've been told that I need a trunk link and 8 logical subinterfaces because I'm using a single cable (instead of 8, one for each VLAN/zone) between each router and the FW. How to configure this?

However, I thought trunking was only possible on switches? Not between a router and a firewall? For example, in a router on a stick configuration, you would define a trunk port on the switch, by using switchport mode trunk, and on a router you would use subinterfaces and tell them to which vlan they belong with the encapsulation dot1q vlan command. This doesn't make the router port a trunking port, right?

Problem 3: Do I need to use redundancy protocols like STP, or FHRP? Or is my network free from loops?

Problem 1: Routing all traffic is done by the default gateway route.

Problem 2: Each zone requires its own VLAN to separate their traffic, each VLAN connects to the firewall where you set up rules to enable specific connections. Switch-to-switch and switch-to-router lines are set up as VLAN trunks to enable carrying traffic for all VLANs simultaneously. This is different from aggregation trunks.

Problem 3: From your graph you don't need STP but if your network is larger and SW1 and SW3 act as core switches you could set up redundant links from each edge switch to both core switches - then you'd need STP.

Since FW1 needs to do all inter-VLAN routing you could omit both 1941 routers and connect the switches to the PA directly.

Not the answer you're looking for? Browse other questions tagged firewall or ask your own question.

4
Does normal packet flow within a virtual router in a PA firewall require a rule?
7
Routing traffic between two subnets
1
Is it possible to tell if a firewall is present on my network path?
4
Are firewall zones implemented similarly to VLANs and subnets?
2
Does each VLAN need a dedicated uplink port?
0
Cisco Zone Based Firewall