Modem/device that can connect and route calls depending on type?

There are ways of allowing fax machines to share the same line as telephones and telephone answering devices. Back in the BBS days, a lot of people had dedicated phone lines for their BBS. A caller need not have their own dedicated line to dial in to a BBS, but you basically needed your own line if you were the SysOp. Computers and teletypes can be acoustically coupled to send and receive data with other computers over the PSTN. Likewise, I am looking into an effective way to set up a telegraph, a teletype or two, and some modems.

There are two different types of PSTN calls:

It would be nice if I could connect them all to the same line, which works for outgoing calls but is tricky for incoming calls. If I receive a voice call, I want the phone to ring indefinitely. Anything else should be automatically answered. I don't think it is possible to do voice and data on the same line like that, so I would go to two lines - one for voice and one for data, both with Direct Inward Dial obviously. I could hook these up all to their own line, but that would just be a waste of money, since they probably won't ALL be in use at the same time.

Direct connect modems can automatically answer calls, but that assumes that they are on their own line. I know fax machines are able to detect fax noises and then send output to a TAD if it is not a fax machine calling. Is there some sort of "supermodem" that is able to filter and route calls appropriately?

For example, a modem that has a jack labeled "FAX", , a jack labeled "TELEGRAPH", and a jack labeled "DATA" (for computer modem, connected either to a teletype/teleprinter or a terminal) (and then no jack for voice, since that would be impossible). All of these calls should be answered immediately, which avoids the conflict with letting the phone ring if a person is calling but answering immediately if it is not (since there is no way to tell until the line is picked up, this is impossible).

I know computer modems emit tones (Carrier Tones) to let the other modem on the other end know a computer is there (this is how war dialing worked). I know fax machines have their own distinctive tone as well.

So, taking advantage of the four different data types having their own distinctive tone, is there (or could I design) a modem that will automatically pick up incoming calls, quickly listen for the type of tone (carrier tone, fax tone, telegraph) and then 'route' the call to the appropriate machine?

I believe telegraphs have always used dedicated circuits and were not used over the PSTN, so they don't have their own tones. Hypothetically, let's say a telegraph modem exists and it emits its own distinctive tone and would be connected to any machines in question.

And in this manner, I would be able to use any of these machines on the same line (not at the same time), or automatically have the correct machine receive incoming calls.

Basically, what's the question mark in the diagram below? If it doesn't exist, could it be designed? 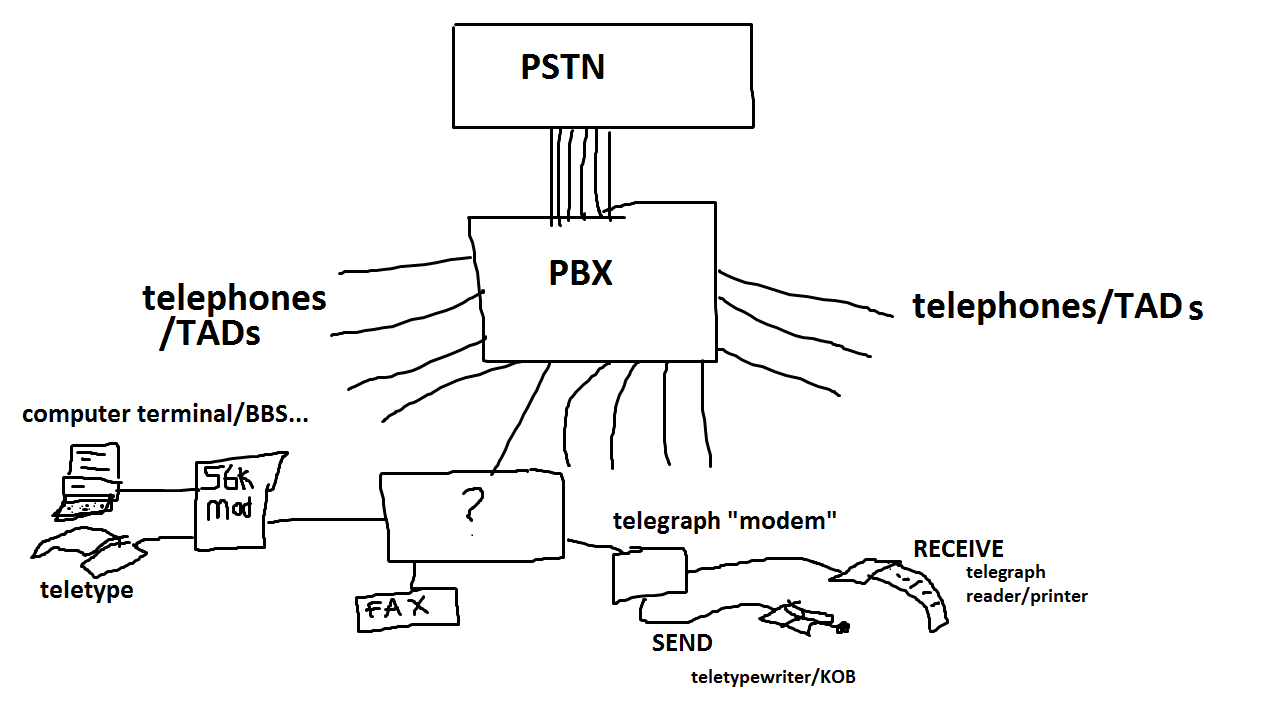 *Note, telegraph SEND could also include key/telegraph RECIEVE could also include a sounder, etc. (a lightbulb even) **Telegraph modem would include a rotary dial since telegraph is not on a dedicated circuit and calls need to be routed - i.e. to other telegraphs on the PSTN - or simply allow a telephone to be connected so the modem can route and determine off or on hook status if the telegraph does not have an on/off switch. Telegraph modem might also convert telegraph "pulses" to noises of some frequency ideal to send over PSTN, and convert incoming noise back to pulses telegraph READ (sounder, printer) can understand.

**Teletype would have to be connected to an acoustic coupler, not a 56k modem.

***Also, an ANS/TAD port could be added for an answering machine, so that if no tones are sent from the calling party, the ?device automatically defaults to the answering machine so that if a person called the line to leave a verbal message, they can do so.

****The line going from the PBX to the ?device would be intended for 1-way communication, not 2-way. That means either the devices could be used to send out, or they could receive telegrams, data, faxes, messages (answering machine).

Apparently, you are overthinking this.

With a PBX you get as many PSTN lines as necessary for the total number of simultaneous PSTN calls that you may have. Usually, you get a DID range that is larger than the number PSTN of lines. You could have a single incoming PSTN line, but separate numbers in a DID range for each internal function. The PBX can then direct the call to the appropriate internal device based on the called number.

Not the answer you're looking for? Browse other questions tagged routing telephony modem or ask your own question.

11
Quagga routing and security
2
can a cisco ASA be configured as a DHCP server for a VLAN on a subinterface? and route packets between VLANs?
2
Intermittent periods of high packet loss, one hop beyond router
2
Can VPN on router connected to the modem bypass a double NAT created by two routers unbridged and connected to each other?
0
Connectivity from DHCP-based machines to servers with static IP addresses on the same gateway
18
Why are IP addresses given to each interface and not device? What would the implications of that be?
4
How Can a VPC ping the Router through an Etherswitch that behaves in one port as router and in the other as switch