Ask Question
Asked 3 years, 8 months ago
Active 3 years ago
Viewed 10k times
1
Closed. This question is off-topic. It is not currently accepting answers.

Here is an example of the network topology I am trying to create. 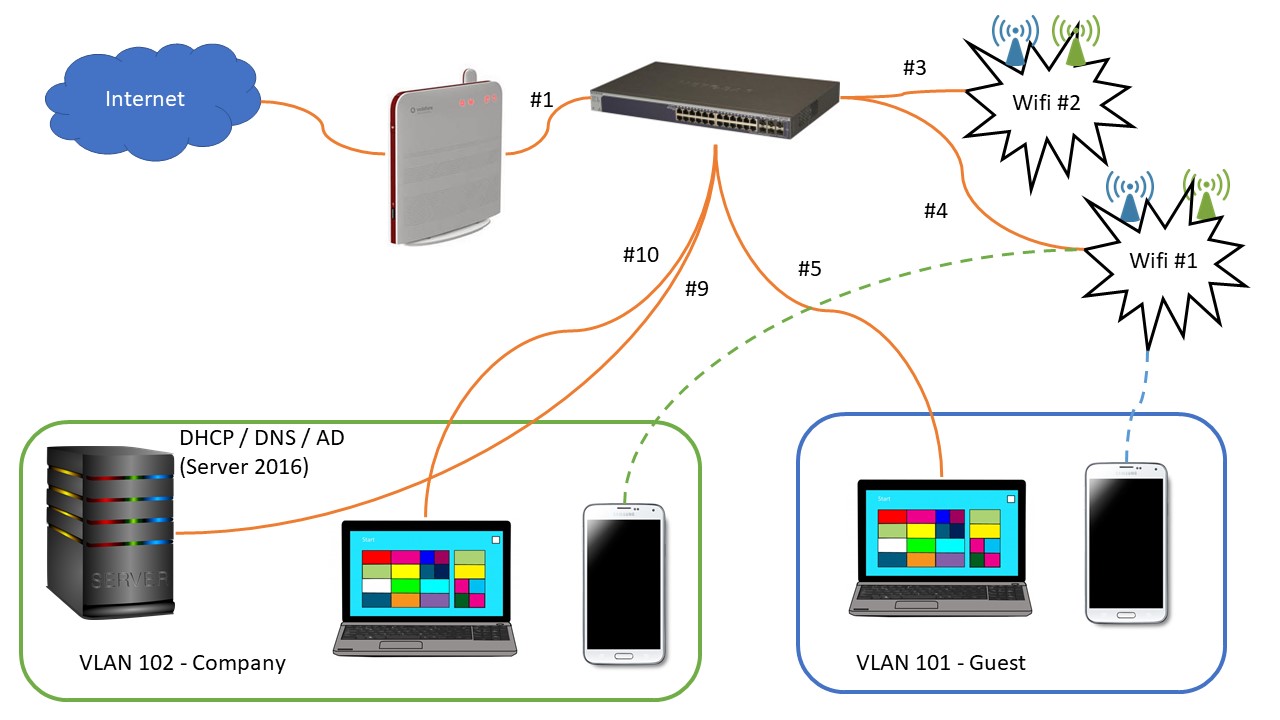 There is the standard router - Netgear Genie. It can link each port to a VLAN, and the Wifi can be on the vlan, but my thought was to leave this agnostic of VLAN and just route traffic. It is also a DHCP - ideally just for the Guest network.

The switch is a smart switch and supports VLAN,

There are two WAPS which are HP and can also broadcast multiple SSID each on a VLAN.

In the "Company" network, there is a Windows Server 2016, which is the AD, DNS, DHCP etc for the company network. (Company - small business from home...)

The "Guest" network would be for non business users who do not need access to the Company network and should not be able to see.

(There is also CCTV, and this would be useful to segment on it's own VLAN too. but this is an issue for another day)

I have two questions:

1) Is is possible to have the DHCP server on the router level, or does it need to reside within VLAN 101. (so they are both separate to each other)

2) What VLAN tagging and PVID settings are required for the switch.

Many thanks in advance.

The DHCP server can reside on the router, provide this router support settings a DHCP server for multiple networks. (Note that Netgear Genie is a home product and as such is off-topic here).

Alternatively, a single DHCP server located in a specific VLAN can serve multiple VLAN, using DHCP relay on the router that connect those VLAN, and settings the DHCP server IP address as the destination of the DHCP requests.

Since the Windows server is already in VLAN 102, it will directly server this VLAN and you only need to relay DHCP requests for VLAN 101.

On the switch, the ports that connect to hosts (computers, servers) must be set as access for the desired VLAN.

I.E. the port that connect the Windows server must be configured with PVID 102 and untagged VLAN 102.

Not the answer you're looking for? Browse other questions tagged vlan dhcp topology or ask your own question.

1
Devices in VLAN can't obtain IP address from DHCP server
2
How to configure DHCP Relay Agent with multiple VLANs?
1
GNS3 - configure two DHCP servers within one VLAN
2
My tagged vs untagged configuration in my switch is not working as I expected.
2
D-Link DGS 1210-24 Managed Switch: sharing a gateway (router) between 2 VLANs
2
How to set up DHCP in tagged VLAN with Cisco 300 switch
2
How to configure DHCP pools for 2 VLANs/subnets sharing a switch
0
Multiple DHCP Pools in Ubuntu Server with DHCP Relay
2
Why can my device not get an ip from DHCP in a network with 2 VLANS of which one has DHCP?