My Cisco 3825, (ISR?) is running fine now, thanks to a lot of help. We've now gotten another WAN link from a different ISP for redundancy.

What I need is to know how to configure the router to be able to Fail Over if the main link has an issue. I don't want to load balance.

I've seen something called HSRP, but the article seemed to only reference Catalyst devices, so I'm not sure if it's a thing on my router, and also, it seems to deal more with multiple routers, not a single one with two WAN links.

I will also need to purchase another card to add a port for this new connection, could someone tell me exactly what I'd need? 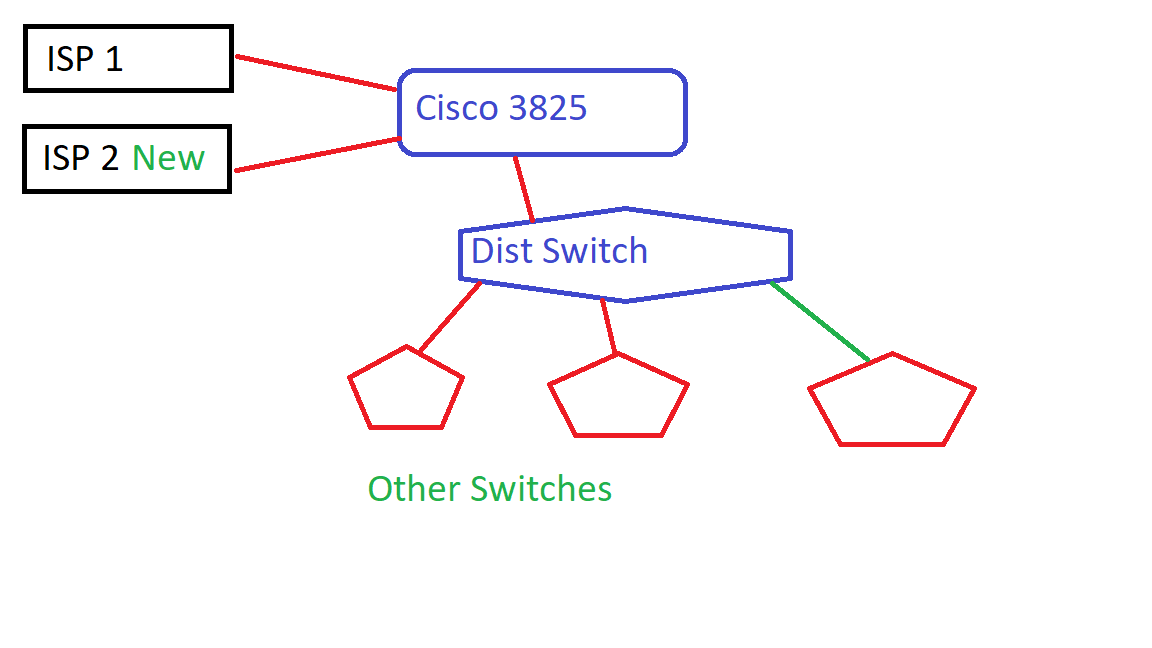 Couple of things. First, the link may not go down so depending on link down to failover may not actually work. Second is NAT/PAT. Cisco has published a how to for exactly what you are looking to do. See ISP Failover with Default Routes using IP SLA Tracking

This document describes how to configure WAN (or ISP) redundancies, wherein multiple WAN links terminate on the same end router. This document also explains how to configure Network Address Translation (NAT) when there are multiple ISP's for internet connectivity and you want seamless failover i.e. when Primary ISP goes down then Secondary takes over with correct NAT with the use of the secondary ISP's public IP address.

HSRP is for your LAN, not your WAN.

Normally it is very simple if you use static default routes.

On your WAN, you probably have a default route:

A static route such as this has a really low AD (default is 1, and lower is more preferred). You can add a second default route pointing to your backup next hop, but assign it a higher AD (for example 10):

If you use a routing protocol (eBGP, but that is unlikely, although not unheard of, with your router), you can also use AD to prefer one over the other, or there are other methods using the routing protocol.

Unfortunately, that router and the interface cards for it have reached not only End-of-Sale, but also End-of-Life. You may be able to find a used HWIC-1GE-SFP card.

Not the answer you're looking for? Browse other questions tagged cisco routing router failover or ask your own question.