While watching a networking course I discovered there is (was) a 5-4-3 rule about boundaries of older Ethernet.

I failed to understand notions in the rule.

Below is the picture that, as I understand, demonstrates the 'maximum' configuration for 5-4-3 rule. 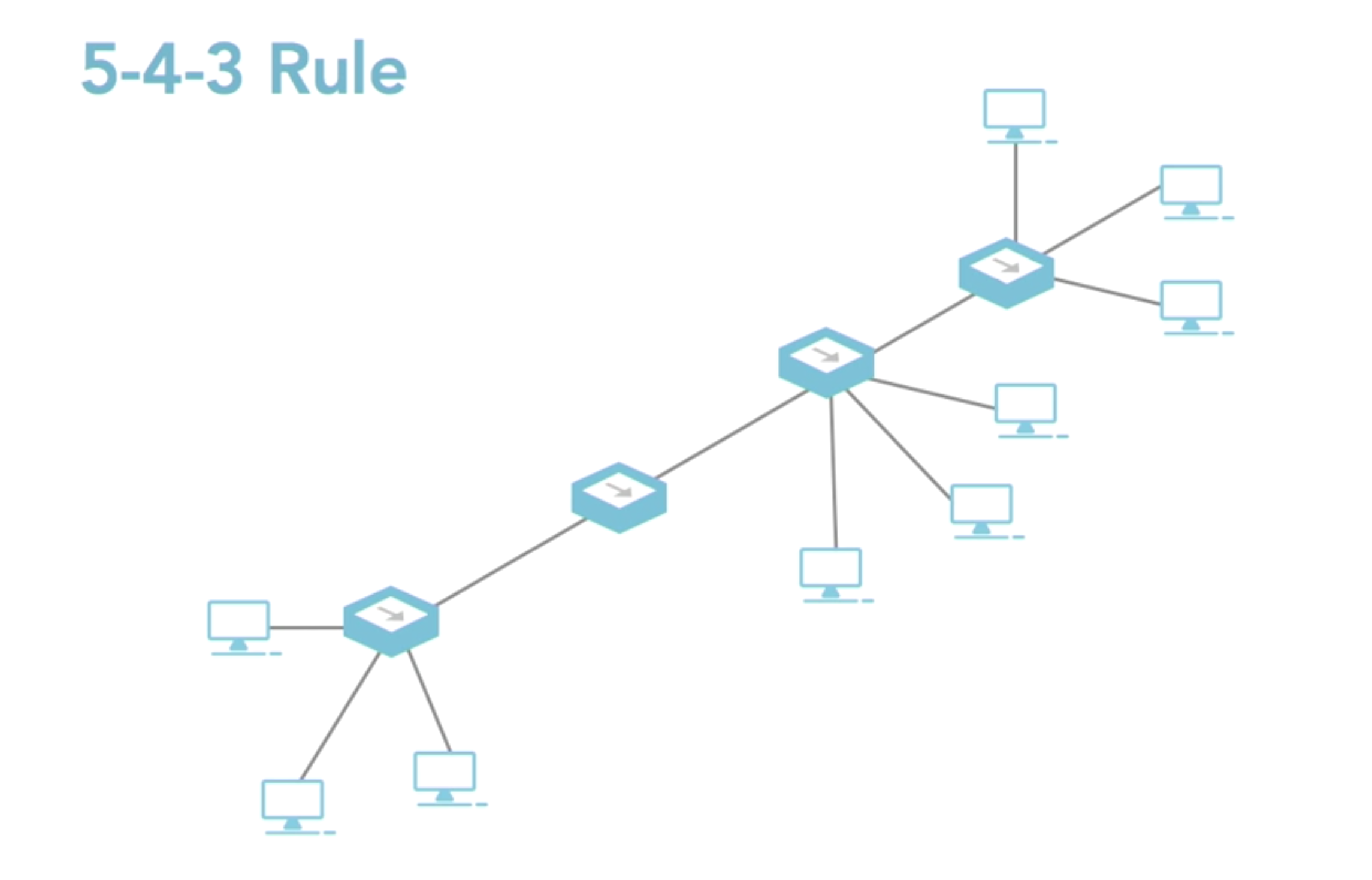 It means that in a collision domain there should be at most 5 segments tied together with 4 repeaters, with up to 3 mixing segments.

What segments are being talked about here? Wiki again says there are 3 kinds of network segments - layer 1-2-3 - basically collision domains, broadcast domains and subnets.

Since 5-4-3 rule talks about 'repeaters' (basically hubs as I understand) I thought that segments is rule are layer 1 segments - collision domains.

But since there are only hubs participating in the rule, isn't all the network a single collision domain? There's nothing like a switch or router to split a collision domain here.

Anyway, even if segments in 5-4-3 rule are for some reason layer 2 segments, I still can't find anything sensible of count 5 on the picture..

Not directly connected with the question, but 4 hubs are of course obvious in the picture, and while I see that computers 'can only by connected to a max of 3 hubs' (let's say), but

First of all, a network (collision domain) may be larger than the one in your chart, but its diameter may not be larger than defined by the 5-4-3 rule, ie. no two nodes may be further apart than five (electrical) segments overall, four repeaters, and three mixing (=shared electrical medium and implictly half-duplex) segments. This ensures that a collision propagates reliably across the network within the time slot, avoiding late or undetected collisions.

The difference between a "mixing" and a "non-mixing" or link segment is that the latter needs to use a full-duplex capable, point-to-point medium - one that has separate send and receive wiring, like 10BASE-T or 10BASE-FL. The reason for this is that collision detection is faster on such a medium. Coax 10BASE5 and 10BASE2 are mixing segments and the collision detection may be slightly delayed, even with only two nodes attached.

Note that the actual Ethernet communication will still be half-duplex at all times - the 5-4-3 rule is about a repeated network (single collision domain) and full duplex requires switching. If you use switches instead of repeaters there are no such rules to apply. In theory, a switched layer 2 segment could have any size and diameter but there are other practical limits.

Edit: The term layer 1 segment has been removed as it may apply to an electrical segment as well as to a collision domain which are both segments in layer 1 but different things. Only in early, small networks with a single coax cable both were identical.

Not the answer you're looking for? Browse other questions tagged ethernet network or ask your own question.

4
What is the difference between RJ45 connection standards WE/SS and TE-AMP and when and where are they used?
1
How collisions are handled in the daisy-chained switches?
2
Switch Trafficking
6
Full Duplex and Collision Domain
2
The Speed of Hubs and Shared Collision Domains
5
The best way to understand Vlans?
1
How do routers. switches, bridges and hubs deal with corrupted data?
1
Do switches allow parallel connections?