My tagged vs untagged configuration in my switch is not working as I expected.

My topology is pretty simple although dumb, I'm thinking in fixing it later.

I want to create a VLAN for my guest wifi so people connecting to this WiFi don't have access to my server.

I originally had setup two WiFi networks, one for the guests and one for my internal network. Now what I want is to separate them so I don't want people connecting to my guest wifi be able to access computers or my servers connected on my internal network. The solution as I have been doing the research is to create a VLAN for just the guest network so that way it will be isolated. 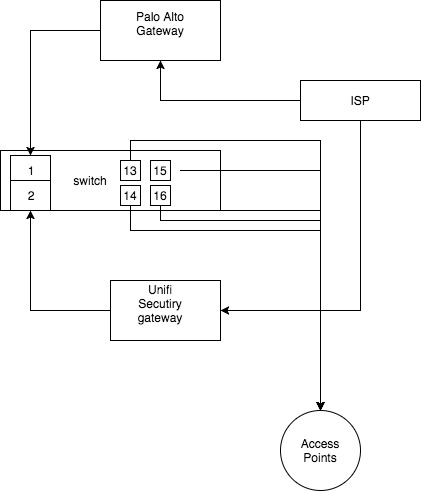 Now, the problem is the tagging those ports in the switch. As you can see here in the configuration of the VLANs inside of the switch:

This configuration works, but I don't know why. In my opinion it should be Tagged for port 2 in VLAN 99 and Excluded in the default VLAN but, if I do that I can connect to the guest WiFi but I can't get an Ip address so the DHCP server on the Unifi gateway fails. Can anybody help me with this one? Thank you!

However, this puts your WAPs' management completely inside the guest network. If you want to avoid that, use the same VLAN trunks - production untagged, guest tagged - with the WAP ports (on both switch and WAP side) and associate the guest VLAN with the guest SSID.

It seems that you've tried the latter setup but you reversed the tagging for the Unifi - if it's the same on the Unifi side it's fine but I wouldn't do it that way.

I don't know your hardware, so I can't give any more specific advice, sorry. And I can't make too much sense of the screenshot either. If you think you've already got the setup you should provide a table with the settings.

Are you tagging the traffic out from the Unifi as well? To use tagged traffic the device on the other end of the trunk port needs to be "VLAN-aware".

3
VLAN tagging, routing, and general pain
1
Problem with DHCP for wired guest clients - Cisco WLC
1
VLAN and LAN on the same port
1
ACL for DHCP configured on Cisco switch
2
How to set up DHCP in tagged VLAN with Cisco 300 switch
2
Restructuring office network advice and How to go about VLAN setup?