vPC problems between nexus 5k’s and 4500

So I need help. I’m not at work, so posting config isn’t really an option, but here goes:

I have a vpc domain on both 5k’s. Let’s call it vpc domain 1. There is also a po1 between the 5k’s that is the vpc peer link which is po1.

5k1 has been in place for a long time (it originally had a plain trunk to the 4500). So, I copied the config from 5k1 to the new 5k (5k2), and simply changed the interface vlan ip. Then I proceeded to setup all the said port channels and vpc’s.

5k1 pings out fine using its interface vlan ip. I can remotely manage it. All is well.

5k2 is not. I can ping across mgmt0, but I cannot ping out from the interface vlan. It says, “no route to host.” I have entered the default route 0.0.0.0/0 x.x.x.x (my upstream default gateway). Show ip route returns nothing because I can’t ping my default gateway.

The weird part is, ALL portchannels on ALL THREE switches are up. On 5k2, show cdp neighbors shows 5k1 AND the 4500. If there was something wrong with the po13 between 5k2 and the 4500, I would think that traffic would route through 5k1.

I guess I’m puzzled as to how the portchannel could be up and passing cdp, and apparently lacp traffic, yet I cant ping out. 5k2 is useless at the moment. Any initial thoughts on things I can check? Should I just wipe the 5k2 config and build it from scratch?

When I go back to work, I’m going to unplug the peer link and set up a simple trunk from 5k2 back to the 4500 and see if I can ping out then...still, any initial thoughts would certainly be welcome. 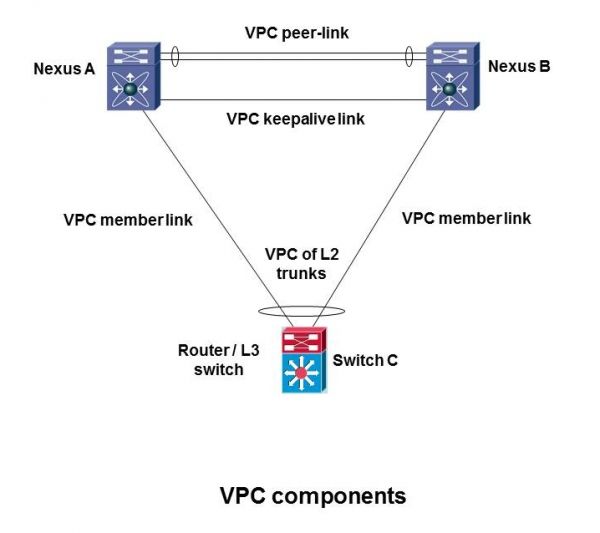 So I figured out the issue: I had a non-L3 daughter card installed with an L3 LAN BASE license. So, I had to uninstall the license file. Before you do, beware that the license file is tied to your switch serial number as far as Cisco is concerned. I simply put in a TAC case asking them to disassociate the license from my particular switch SN. I also took screenshots of the license file in my switch config (show license brief), and saved it in case I need to prove to Cisco in the future that I should have a floating L3 license. Here are the two simple steps to remove the license:

That’s it. Everything started working.

Not the answer you're looking for? Browse other questions tagged vpc or ask your own question.