Obviously I'm lacking some networking knowledge, and I wish somebody could help me understand something fishy I found on a pfSense router in an organization yesterday. The pfSense router forces subnet mask of 255.255.240.0 on a LAN gateway like 9.9.192.1. Is this common? It's on ipv4 but it also has a turned off option for ipv6 currently, if that matters. 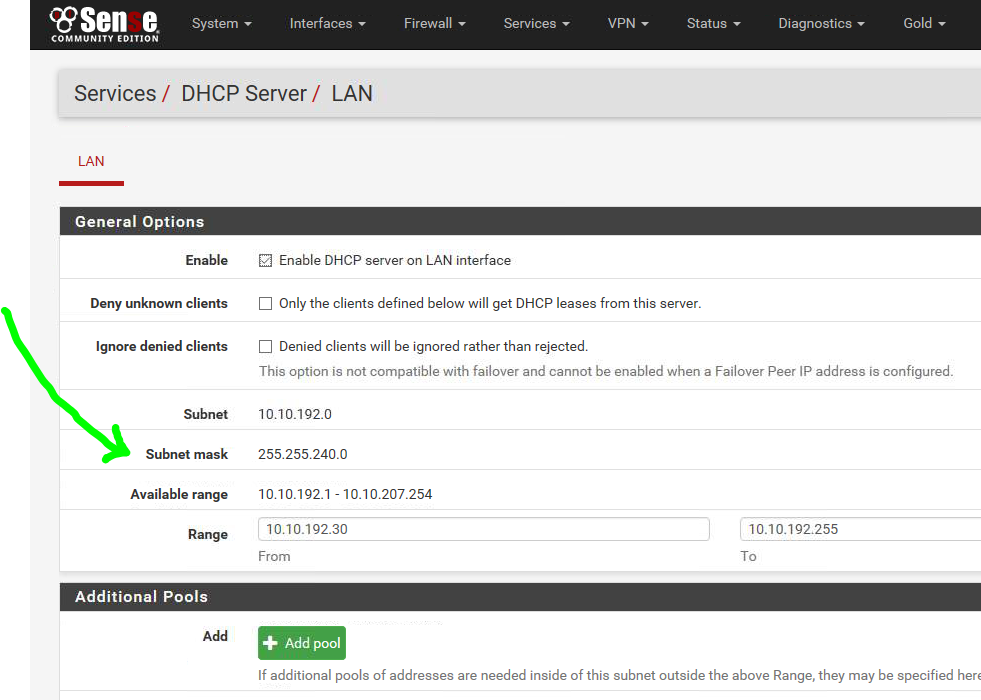 It's valid, because it works, but the minute you add a new computer or printer to the network and forget about this /20 bits subnet mask quirk, that newly added device acts super wonky and ends up freezing, crashing and/or dropping out of the network. For instance, a printer that had 255.255.255.0 as its subnet mask was receiving only a third of a page to print and would freeze until it's rebooted. I suspect it was receiving more bits and overflowed its RAM or something, hence the freezing. It's not the case of a single cheap printer, it did that to 4 printers out of 5 at this office. Different brands, different models, some 350$ printers, some 80$ printers.

Optional meditation on that gateway:

If a computer OR a printer has a 255.255.255.0 subnet mask while the other one has a 255.255.240.0 subnet mask, they can communicate to extremely wonky fashion and the printer almost immediately freezes when sent packets, never prints anything more than a third of a page and it crashes/freezes to a point it has to be rebooted (unusable really). Tough, both devices still can access the internet fine.

If both the computer AND a printer have the 255.255.240.0 subnet mask, they communicate super efficiently (instantaneously) without any problem at all, super stable and fast.

Can anybody explain why a pfSense router's subnet mask wouldn't be all 24 bits (255.255.255.0) like any regular router is? What is the advantage or any reason that could justify this /20 bits subnet mask enforcement? Is it common? Thanks.

9.9.192.1 is an address owned by IBM - so unless they've given it to you, you can't use it on your LAN without causing problems.

Usually, your network devices are configured by DHCP, so possibly you just need to correct the scope there. If you're not using DHCP now is a good time to start.

edit 1: You might want to read up on how subnetting works in this good question/answer: How do you calculate the prefix, network, subnet, and host numbers?

edit 3: If your can't change the LAN subnet mask on the router just don't do it. Change the mask in the DHCP options and simply don't use the extra 4 bits of host addresses.

edit 4: your screenshot in the other comment - you should add additional details to your question instead - shows the DHCP options. These are most probably inherited from the NIC's network settings which may be the reason why you can't change them. Check the NIC's IP settings and correct the mask there if possible; the DHCP scope is likely to follow.

QUESTION: Can anybody explain why a pfSense router's subnet mask wouldn't be all 24 bits (255.255.255.0) like any regular router is? What is the advantage or any reason that could justify this /24/24/20/24 bits subnet mask enforcement? Is it common?

The hosts on a network need to have their network masks set to be the same size as the network mask is configured, otherwise you can end up with problems.

There is no restriction to enforce that devices on the same switched network are in the same subnet - they cannot talk to each other , they still need a router and yet they share a layer 2 collision domain - but it still works - just maybe not the way you want. 255.255.240.0 means there are more possible devices in the collision domain at the IP level so there is a possible performance hit if you get to that many devices actually being present in the subnet - it makes no difference if there are not

Being locked at 255.255.240.0 is not an issue but having read all this - I think you are adding a new device and NOT specifying your correct sub-net mask of 255.255.240.0 and thus the new device cannot reach the devices it needs to and so it freezes with network timeouts (This is understandable )or applications crash because of network connectivity issues- (not so understandable - but it could happen) 255.255.240.0 is correct - so typing in a incorrect mask is wrong - if you cant change the router - then accept that's what the mask is and make sure you use that mask - Changing the mask after first implementation means changing the mask on all devices at the same time. (sort of if you know what your doing and understand the sub-nets you can sometimes work around this )

Your basic troubles were all here:

The answer is exactly in our exchange in comments:

The critical thing is whether any have addresses outside 9.9.192.X ... I > suspect from your description that some do/did. – jonathanjo

Because you had some hosts with addresses 9.9.192.X, some with 9.9.193.X and some with 9.9.194.X, for them to be in the same local network, you must use a network mask of /22 or below. (Many find multiples-of-four netmasks easier to deal with, and so /20 isn't that uncommon on private networks. Your predecessor apparently was in this group.)

For 20 hosts, this is all pretty strange.

Unless your predecessor had constraints you haven't mentioned (segment the hosts in some way to prevent something), it might be worth just renumbering to something more conventional. (To be concrete, you might consider 192.168.0.0/24, with router at .1, servers starting from .32, printers from .48 and laptops/workstations at .128, any switches or odd things at .8)

There are any number of posts here and all over the web on how network masks work, and it's really worth reading up on it. (Mostly they don't explain why it works this way: it's basically because th bitwise logic could be done in a microsecond or so, even on little microprocessors in 1980s.)

Not the answer you're looking for? Browse other questions tagged ipv4 subnet lan pfsense ip-address or ask your own question.

129
How do you calculate the prefix, network, subnet, and host numbers?

2
Access pfSense LAN through OpenVPN
0
Can two networks be part of the same third octet subnet?
1
How can I create a static route between subnets on sonicwall
2
How does a router route traffic on a LAN, in detail?
16
Why is 10.1.255.255 an invalid broadcast address?
0
32 bits or 30 bits for subnet mask