I am posting this question to get better understand of VRF on Nexus switch. 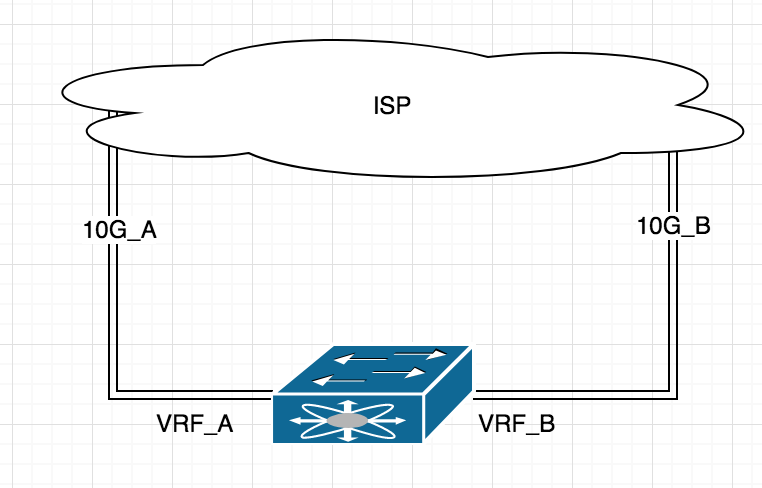 This is the scenario i have 10G_A link from my ISP running BGP on it, now i need more capacity so order second 10G_B link with new handoff and new Public IP pool and terminate on same Nexus switch in that case i should use VRF right? to isolate both link routing.

Or i am missing something to understand VRF?

My goal is how do i handle two handoff link from ISP with different class-C subnet and how do i route traffic for Subnet-A goes to 10G_A and Subnet-B goes to 10G_B link?

If it's not possible with VRF then what would be the best solution here?

If your goal is isolation of traffic then you'd have downstream ports on the switch that would be in VRF's A or B and then configure routing within the respective vrf's (either BGP or just a static default). You'd use different IP ranges in the two vrf's as, ultimately, the Internet is one routing table and has no way to differentiate between identical IP's across your vrf's.

I'm inferring a bit but I don't think vrf's are the tool to accomplish your stated goal of adding capacity. VRF's are fundamentally about segmentation - so in the example above, the switch would be logically split into two distinct operational units. You'd much more typically just hook up the second connection to the same vrf, add it to BGP, advertise the same routes and then potentially adjust policy to shift some traffic to the new line (...this may not be necessary depending on which carriers and what views you're receiving).

If this isn't the case then, again, two vrf's with their own sets of interfaces and routes and you're all set. Logically (at least from a routing perspective) it's basically behaving like two independent switches.