Traceroute inside a per packet load balancing based infrastructure

Could you confirm that in an infrastructure configured with "per packet" load balancing on the Routers (same route same metric), the usage of traceroute become unusable ? In this case the infrastucture should delivered traceroute results like random results for the same destination host ?

There is no way to trace the route of a packet in typical IP infrastructure. There was an experimental extension for it but it was never widely implemented.

So what traceroute actually does it send out probes with increasing TTL and look for the time-exceeded messages.

I recall a presentation (think it was a uknof video) which mentioned a traceroute monitoring tool that had the ability to trace with consistent source ports across multiple traces and report which paths had problems. It looks like the video was https://www.youtube.com/watch?v=jqaiXtBF4ug and the tool was "fbtracert"

Using load-balancing trunks, the hardware needs to keep the flows in order - out-of-order reception in high bandwidth flows usually causes a high performance penalty. So basically, load-balancing works on flows and not on a packet-by-packet basis.

Traceroute uses its own "flow" (ICMP oder some UDP port) which may or may not follow the same path as the flow you're analyzing, so it might show you a completely different route.

Due to how a traceroute utility typically works (by sending a series of ping packets with an ever increasing TTL and then watching for the response packets), you are spot-on that the utility may not give you very reliable information as each of the successive packets sent by traceroute might have taken different paths through the network in a real "per-packet" load-balanced network (note that these are rare).

If you do need a utility to trace the route that a single packet takes through your network, you could try using the RECORD_ROUTE feature of an ECHO_REQUEST. The record RECORD_ROUTE flag requests that any intermediary routing hosts add their "hop" to the route in the IP header.

Note: there is limited space in the IP header for this route recording, and so only about 9 hops will be recorded. Also note that not all routing hosts may support this flag on echo requests, but if the usage is on your internal network (limited number of hops) and your gear does record the hops (you'll know). Then it can be a useful tool.

Check the ping man pages for your platform / OS of choice, but on my Mac (and most Linux distributions) it is as easy as this: 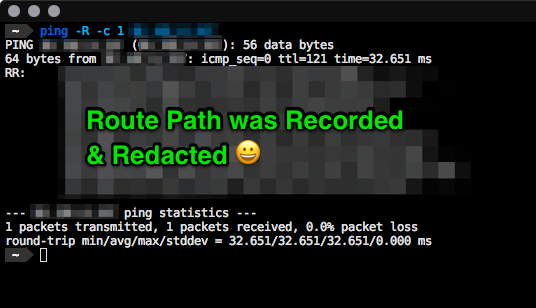 Not the answer you're looking for? Browse other questions tagged cisco routing switching traceroute load-balancing or ask your own question.

10
Inbound BGP load-balancing from same ISP router
4
load-balancing on congestion, OSPF over MPLS
4
OSPF NSSA load balancing
2
How can we identify layer two device in a network or what are those device effects on a frame
1
Preventing Load balancing in EIGRP
2
Frame relay, PVC and DLCI
2
Load-balancing one VPN-connection over multiple WANs