We are a managed service provider running a small sized network in a single datacentre in Sydney. We've recently deployed a new POP inter-state in Melbourne (both are on the east coast of Australia), and for the first time I am having to face real-world challenges in terms of traffic engineering. My hope is that I can get some guidance here on how to get some level of control over my iBGP paths.

I will likely be posting a few inter-related questions, but in this case I am specifically concerned about internal traffic engineering. I'm finding it surprisingly difficult to figure out how to get iBGP to make optimal routing decisions.

The main goal to me is that need to find a way of giving iBGP some concept of a boundary and a distance per POP. So I can distinguish between a POP that is in the same city, vs one that is inter-state, vs one that is east vs west coast. Then optimise inbound/outbound routing based on this.

I know that there will be a lot of case-by-case scenarios, but I'm hoping I can develop an iBGP routing strategy that works maybe 80% of the time and the rest I would have to deal with special edge cases in the config.

Essentially, I want to be able to achieve optimal routing between POPs as we deploy them. But right now I am not able to achieve any level of control over how iBGP is choosing it's paths.

EDIT: 30/01: I think that I am wrong about how IGP cost is calculated and perhaps they are currently the same? All my OSPF routes are type E2. If the IGP costs are the same then I suppose it makes sense best path selection happens based on RID, which in this case the RID of the MEL BDR would be lower than SYD.

I have set the OSPF link cost between Sydney to 15,000 much higher than default. I've calculated this to work reliably with our 100 Gbps reference bandwidth.

In terms of OSPF link costs - this is OSPFs preferences of each next-hop of the BGP routes:

In terms of these OSPF choices, I can see the shorter OSPF "forward metric" is picked up. I would have thought that BGP should pick the Sydney path based on this.

You can see from this trace that we immediately hop to Melbourne via Backhaul because the first hop is 13ms: (139.130.4.4 is anycasted and has paths in both states).

In this output both the secondary Sydney transit is a valid path, and so is Melbourne transit. Melbourne is picked as best.

I tried adding an OSPF link cost of 15,000 which I calculated as a safe figure based on my ref bandwidth of 100 Gbps as always being least preferred OSPF cost. I thought this would count as "IGP cost" and yet BGP is still preferring the Melbourne path for some reason.

After this didn't seem to have any impact, my main plan was to use AS PATH prepending on iBGP. The plan was that I would have peer-groups per POP. And in my templating I would designate how many prepends to do, based on how far apart the two POPs were. I had thought this would be a fairly common type of goal.

I thought this would work pretty perfectly, be a pretty elegant solution, and is exactly the type of solution I am hoping to get to. I wrote up the configs in a couple of hours and deployed. But scratched my head until I realised that iBGP does not support AS path prepending.

Even if I could get this working, it seems like it would never be a supported solution.

I will add more details tomorrow. For now, here's a diagram that depicts our current setup. 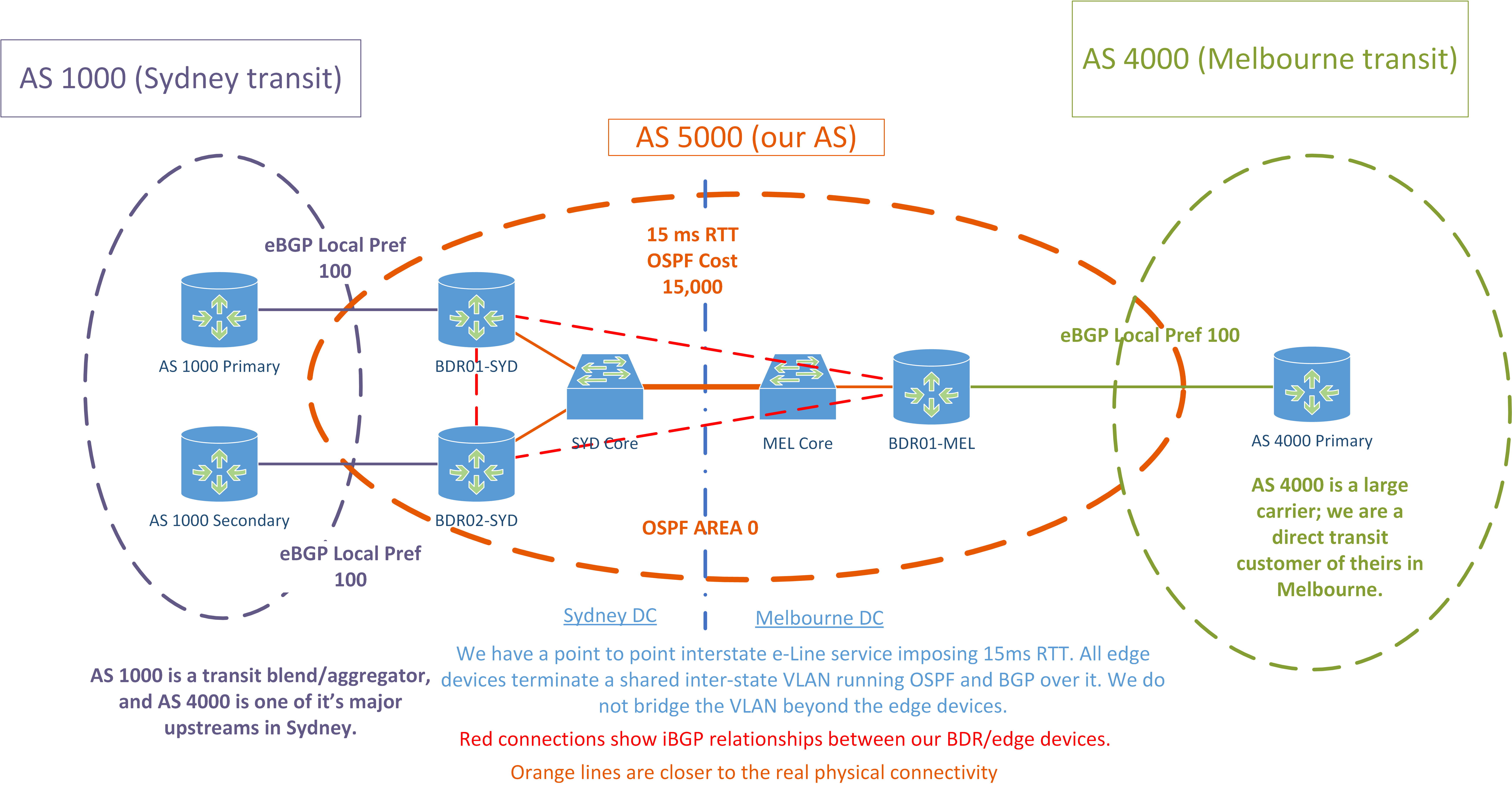 Both routes were External type 2, advertised the route as an OSPF E1, E1 is always preferred over E2 and this solved the issue.

Not the answer you're looking for? Browse other questions tagged cisco bgp ospf ios-xe traffic-engineering or ask your own question.