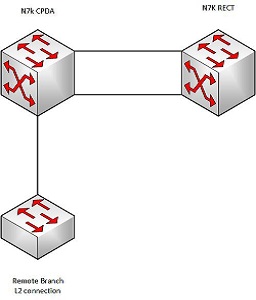 Since the beginning of times i see mac moves on only one of the vlans that goes through this link, and so far i have been unable to figure out why is this happening, the Vlan in question is VID 100.

I am unable to identify the port of origin because most probably there is a bug on this version which is 6.2(16).

From nexus RECT i have been able to decipher the foreign port of nexus CPDA which apparently looks like it is flood of some kind. I have been looking for fabricpath documentation on flooding but so far i haven't found any (if someone has any please share), also the port 100.0.3050 correspond to the eth1/22 on nexus CPDA which is the physical port where the remote branch is connected.

From these logs the only conclusion i have been able to get, is that the mac addresses on these vlan are rebounding form the physical port to this flood lid port on the nexus CPDA and back, and i have not been able to understand really why. It is important to note that all the other branches that connect through VPCs to not show this behaviour.

I have been reading the Cisco Nexus 7k Fabricpath document and i found out something interesting which might be only a coincidence, but still interesting. Accordding to Cisco documentation all vlans in mode fabric have only one mac address learning mode which is "conversational learning".

All the vlans on the Nexus core are configured has "mode fabric".

What is interesting is when i run the command "show mac address-table learning-mode vlan 100" is show as non-conversational.

How can this be, If vlan 100 is configured has "mode fabric". Also this is the only vlan that is in "Non-Conversational-learning" and by coincidence is the only one where mac moves are occuring.

I have no idea if this is a fabricpath bug, also i have no idea what is the purpose of the port 100.0.65535 and where to find documentation about it and i would like to understand why this mac moves are occuring, i would appreciate any kind of help.

9
How to connect private users to applications within a trusted network without direct connection to the Server Switch
4
NTP architecture questions
2
DHCP not working on clients connected to Nexus 3048 but works on SVI
1
Cabling two access ports on the same switch from different VLANs
5
How to resolve a spanning tree issue on a server trunk port?
1
Removing VLANs from core trunks (.1q)…?
1
Cisco Nexus 7009 line card replacement
0
Filter Packet PPPoE Discovery