I want to create a subnet in our network, where the devices which will be connected in this subnet (e.g. 192.168.20.x) will not have access in the Internet.

Is it possible to create such a network? 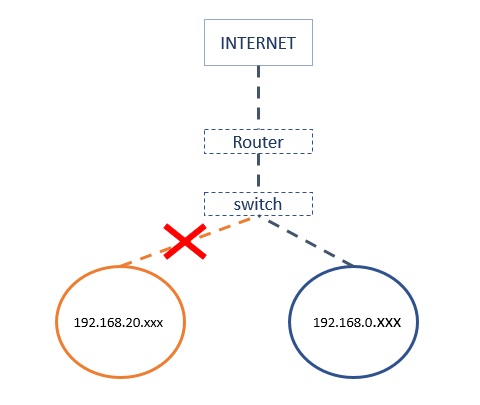 In the switch create 3 VLANs:

And a third one for example VLAN C for the router.

Keep in mind that you must change the IP address of the router to make it belong to another subnet: 192.168.10.XXXfor example.

It means also that the router will be unable to act as DHCP server and the devices on the other two VLANs must get their IP addresses from other DHCP server on their respective VLANs or be configured manually.

In the switch there is a feature called static routing that you can use to create routes between VLANs.

In that way VLAN A can communicate to VLAN B, but will be unable to reach VLAN C.

3
Create LAN B, and use LAN A’s internet connection
1
Make devices visible under Access Point
0
Can I set up a WLAN with a WAP but without Internet?
1
Point to point link with two Internet connections
0
Access IPSec site from another IPSec site
4
What are the negative impacts of using non RFC1918 addresses on a private network?
0
How to create a subnet or secondary network? Do I need VLANs?