This would imply that any host A can do an ARP request on behalf of host B.

This would imply that for any ARP request for a certain MAC address, instead of the owner of the IP in the ARP request TPA, somebody else answers in his stead. This would also imply to me, that I can get several answers for a single ARP request.

We can compare the values on a traditional "normal" ARP conversation, and a Proxy ARP. 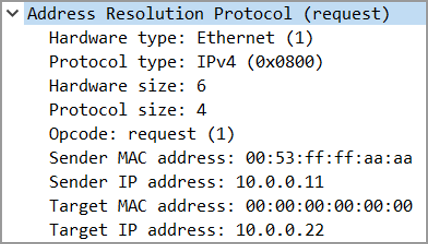 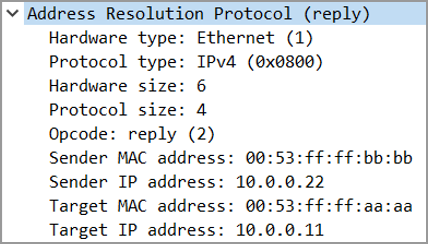 SHA and THA show up in Wireshark as "Source MAC Address" and "Target MAC Address" and looking at the images above, it seems that all three fields match (across the two frames, of course) -- they are both 00:53:ff:ff:aa:aa. This also matches the Ethernet Source in the original Request. So it seems for a Regular ARP, all three values match.

Next we'll look at a Proxy ARP:

But there is one "other" type of ARP conversation we haven't looked at yet...

So in a way, the ARP Probe/Announcement sequence does not have an ARP Reply -- only ARP Requests. And in that case, then the Ethernet SRC and the SHA always match each other -- but there is no THA in a Reply to match against.

Looking at the captures above, it seems in all cases the Request TPA and the Reply SPA are identical.

I can't imagine a situation in which they would be different. But I'll admit I haven't explicitly researched this point specifically.

Which means, that at least according to the original specification, this is not intended to be done.

Looking at RFC 826, you can easily find that the request SHA/SPA should always match the reply THA/TPA:

This comes from the section detailing how a received ARP packet is handled. Since the request's SHA/SPA are now swapped to the reply's THA/TPA, they should match.

So does this match the Ethernet source? Again back to RFC 826:

As for the request TPA being the same as the SPA, we can expand out the previously quoted section of RFC 826 a bit:

So, if an interface is not the TPA, it should hit a negative condition in response to ?Am I the target protocol address? and end the processing. If it is a match to the TPA, then again we swap the TPA and SPA. So again they should be the same.

Additionally, if the TPA in the request where to reply with a different SPA, note that the original requester upon receipt of the reply would put the reply SPA into its ARP table. It would still not have an entry for the original request's TPA and as such would start the ARP process again.

Now, all that being said, that is what should happen. RFC 826 does not specify any sort of check to verify that the Ethernet address of an ARP frame matches that of the SHA. That doesn't mean such a check doesn't exist, it may be added to the driver or implemented on the network to help prevent abuses of ARP that you allude to in asking your questions.

Also, I should point out that if you step outside of Ethernet to FDDI, the FDDI source address will not match the SHA. There is some ARP "ugliness" that was necessary when Ethernet was bridged to Token Ring that required the payload of ARP packets to be modified by the bridge due to differences in the bit order used for addressing. When FDDI came along later, while it used the same bit order as Token Ring, for ARP payloads they used the Ethernet ordering of bits to avoid this "ugliness."

Not the answer you're looking for? Browse other questions tagged arp or ask your own question.

7
What to use as ARP request Target Hardware Address?
3
Should the source and destination protocol addresses be the same in an ARP reply packet?
7
ARP Questions (Packet Types, Ethernet, Cache, Gratuitous)
1
ARP Network monitoring and debugging:
1
How do protocol stacks determine the destination mac of reply packets?
5
Network Device sending ARP request (opcode 1) but with Source IP 0.0.0.0
4
Why would a switch ever send an ARP request for a MAC address when it can just wait for the first packet to be received from a device?
0
ARP requests from a different subnet