SSH and port forwardings in both directions [closed]

I can't undersatand this :

All communication happens using SSH with port forwardings in both directions

A well-known search engine suggests it's a quote from RIPE describing the network design for Atlas, its internet monitoring network, which has lots of probes out in the network.

It has this diagram (copied per RIPE public-non-profit permissions) 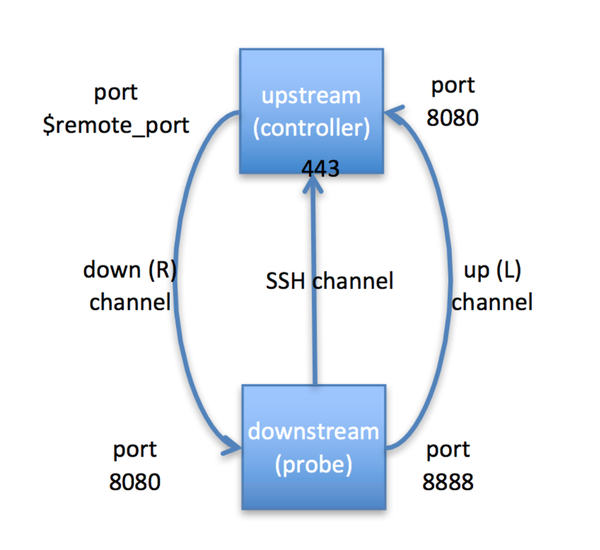 From reading that document, my understanding is:

Implicit in this is that SSH is forwarding TCP streams, not UDP.

There are many possibilities with most SSH software, but the usual situation is the incoming stream appears to come from the localhost in the following way. (Assuming this is web traffic ...) A web browser on the client connects from localhost:random to localhost:8888 where SSH (on the client) is listening. SSH sends the traffic, wrapped up in SSH protocol, to the server, which unwraps it. Then the SSH (on the server) makes a connection from its localhost:random to server's localhost:8080.

There is endless material available on SSH port forwarding to cover it in detail. You'll have to dig through more of RIPE's Atlas project if you want the exact details of what happens there.

Not the answer you're looking for? Browse other questions tagged ssh port-forwarding or ask your own question.

14
how to block ssh tunneling traffic?
4
How to install SSL key and certificate on SG 300-10 (and SSH functionality)
2
How do I I test ip ssh dh min size on two cisco routers?
1
SSH failing from Cisco routers to Dell switches
1
SSH access to router via inband and OOB ports
3
Cisco ASA Port Forward using a custom RDP Port
1
Cisco `ip ssh source-interface` refers to server, client, or both?
3
In port forwarding, is the ultimate destination decided solely by the intermediary entity?