IPv6 in PPP - should be an Interface Identifier negotiated FOR both ends of a link? Clarification of RFC 5072 needed

I am trying to implement IPv6 in an existing VPN PPP software, but having hard time of understanding some of the RFC 5072 sections meaning. Namely, section 4.1.

Assumption 1: PPP interfaces do not have MAC addresses.

The VPN server software by itself is creating for each connection a virtual ethernet interface, with it's own virtual MAC addresses etc. The software also allows bridging real interfaces too. The software itself does all the L2 switching internally between both virtual and bridged real interfaces, acting as an L2 switch. Assume this structure: 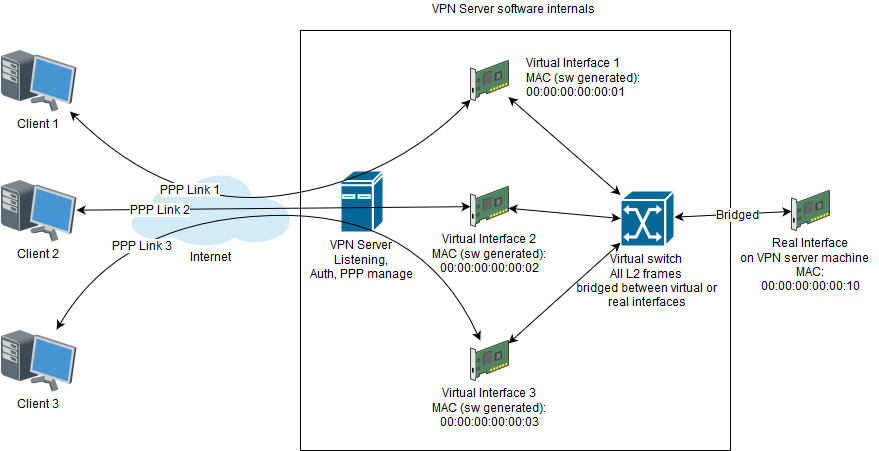 Assumption 2: for any received IPv6 packet on MAC 00:00:00:00:00:01 we will forward the packet unchanged (except for stripping the Ethernet header) through the PPP Link 1 to Client 1, and vice versa all Client 1 IPv6 packets received through PPP Link 1 will be sent unchanged into the internal virtual Ethernet switch with the originating MAC of 00:00:00:00:00:01 (creating the Ethernet header ofc). We need to do because of Assumption 1, so the Virtual Interface 1 is acting instead of Client 1 for all L2 ethernet frames handling.

Now in RFC it is said:

This is the part which seems unclear for me: "different interface-identifier values are to be selected for the ends of the PPP link".

The negotiated interface identifier is used by the local end of the PPP link to autoconfigure an IPv6 link-local unicast address for the PPP interface.

Another possible interpretation I am having is that both the Client 1 side and the Server side (Virtual Interface 1 side) should both select two different interface identifiers, but during the negotiation one of them will be discarded, and only one will be accepted after negotiation.

So what does that "different interface-identifier value for both ends of a PPP link" really means?

...upon completion of the negotiation, different interface-identifier values are to be selected for the ends of the PPP link.

In other words, by the time the negotiation is done, the two ends of the link must end up with two different values for the 64-bit interface identifier. IOW, it should be impossible that the "Client 1" end of the PPP link ends up with an identifier of 0x1122334455667788 and the "Virtual Interface 1" end also ends up with 0x1122334455667788. Because if this happens, it would mean that the IPv6 link-local addresses on the "Client 1" end would be the same as the IPv6 link-local address on the "Virtual Interface 1" end - which is obviously a Bad Thing.

The RFC talks about how a "tentative interface identifier" may be generated (from local physical MAC address, machine serial number etc.). If both ends of your system e.g "Client 1" and "Virtual Interface 1" are able to do this correctly so that their "tentative interface identifiers" are guaranteed to be unique, then the negotiation will just go through fine, with each end ACKing the other's identifier. Otherwise one end (say "Client 1") can send a value of 0 to the other end ("Virtual Interface 1"), who will then bear the responsibility of assigning an identifier to the other end.

This assumption is already wrong:

If you have a local IPv4 network with the network addresses 192.168.123.x and you connect some computers via VPN these computers will be assigned an IPv4 address in this range and the VPN works exactly in the way you describe it.

Writing a VPN software you have two possibilities:

I am actually opting for the second option.

As far as I know RFCs assume that the first option is used. Therefore you will not really be RFC-compliant anyway.

... if I should negotiate as per RFC a second IID in this case for EACH client ...

The only background of the sentence in the RFC is that the link-local IPv6 address of a computer is calculated from its IID. If both ends of a PPP link have the same IID both ends would have the same IP address!

However your VPN server should only have one link-local IP address. Therefore it would be best to use the IID of the real network card of the server for all the PPP links. (Note that many OSs do not use the MAC address but a random number as IID.)

If you use different IIDs the server will have multiple IPv6 addresses!

Unfortunately under some OSs PPP first "claims" some random IID. If your network card accidentally has the same IID as it is claimed by the client you have to use a different IID (and therefore a second IPv6 address - although you have to force the client to use another IID).

I was not sure if it is possible to force the other end of a PPP link to use a certain IID. I was also not sure if the PPP stack allows any link-local address to be sent or if it only allows only the two IPv6 addresses of both ends.

If one of these two conditions is not given this would be the "killer" for the "second option" when your VPN server should work with "standard" PPP clients (software not written by you).

At least under Linux both is working.

4
Cisco & Juniper: IPv6 link-local addresses used between ISIS neighbours
10
Cisco IPv6 BNG Radius Attributes
1
Misbehaving host always uses the gw's MAC as destination: Violation of standard?
2
How are VPN Clients given IP addresses when they connect to VPN Routers such as VyOS? (How do Virtual IP Address Pools fit in?)
6
What MAC address do I use to generate a IPv6 Pseudo-Random Global ID
0
Understanding EUI-64
2
How can MLDv2 work according to the RFCs 3810 and 4606?
1
Can link local addresses be used for transit networks without breaking routability?