How is data sent from multiple different sources (computers) to the same destination host (computer) on a local network is handled by switch?

Let us say I have switch S, to which I have connected 4 hosts (A, B, C and D). Now let us say hosts A and B both want to send a series of data to the same host D at the same time. So here, A and B are transmitter nodes and D is the receiver node.

How is the Ethernet switch going to handle such situations?

A switch buffers frames - this is in contrast to a repeater hub that can't buffer anything.

As @jcbermu has pointed out, both frames from A and B are first stored in their respective ports' receive buffers.

A switch normally uses a first-come-first-served principle. When priorities and QoS come into play the switch uses multiple transmit buffers for each port where higher priority frames are generally transferred first (depending on implementation).

When the total ingress flow for a certain destination port is faster than the port can transmit for more than a very short period (microburst) the queue buffers quickly overflow and the switch drops packets.

Switches forward all packets it receives to the best of its ability. If is unable to send a packet immediately, the packet is queued in a buffer and if the queue is full, the packet is dropped.

Typically a switch has input and output buffers per port instead of a common buffer for each port, so an overload of incoming traffic port doesn't affect the outgoing of the same port.

This is a diagram of this buffer arrangement: 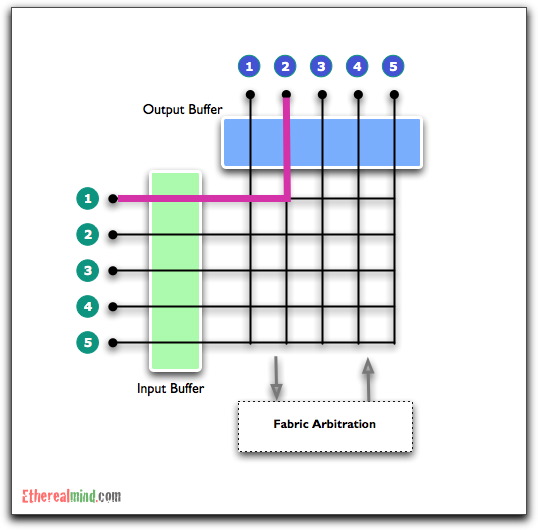 The size of the buffer determines the amount of queuing available on the port without dropping packets and causing performance degradation.

Collision is a must in Ethenet network. The ethernet use CSMA/CD to avoid collision. You may refer to the topic of CSMA/CD for detail.

Not the answer you're looking for? Browse other questions tagged switch ethernet lan or ask your own question.

30
How does a switch learn a switch table?
4
How are duplicate packets handled at the Data Link Layer?
3
Do typical Ethernet switches have timeout for MAC table entries?
4
How does Ethernet Switch ensures the validity of the MAC address table?
1
Half duplex setting switch forwarding frame collides with host forwarding frame
1
How does the swtich know if a packet needs layer 2 switching or layer 3 routing?
2
Why must host A continue to transmit after host b sends runt frame post collision on ethernet? (CSMA/CD)
1
How are packets ( received from the server ) sent to the host from the gateway ( which is present in the host network )?
0
How does a network switch prioritize ethernet frames with the broadcast MAC address?