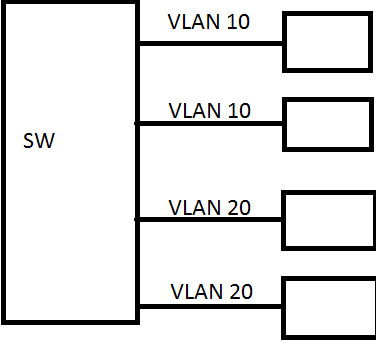 Would the data arrive to the computer on VLAN 20? If so, is there some way to prevent that from happening?

VLANs logically break a switch into multiple, unconnected switches. There is no traffic between VLANs (layer-2), except through a router (layer-3).

In your example, there is no router, so there can be no traffic between the VLANs. Even if you had a router, the multicast traffic would not be routed between the VLANs unless you had configured the router to do multicast routing for that particular multicast group.

There is no inter-VLAN communication without a router. Multicasts are not usually routed - unless your router is specifically configured to do so.

Not the answer you're looking for? Browse other questions tagged routing vlan multicast igmp or ask your own question.

8
IGMP snooping and link-local multicast addresses
6
IGMP Multicast router overrun
4
Multiple VLANs under one subnet (for traffic control)
1
multicast flow - send and received by same host
1
Cisco 49XX multicast flooding
0
Multicast in one VLAN
0
What prevents a device from receiving its own multicast stream, and can it be turned off?