Can bus and star topology be used simultaneously?

But it seems strange a bit because I heard that bus toplogy is old-fashioned topology and star+switch topology replaced it so I can not understand why both bus and switches are used in the first picture.

Are two pictures are same? Is the first picture just ambiguous?

I would have said they weren't so much ambiguous as badly drawn.

As you say, there are very few bus-topology wired ethernet networks these days. The main issue (with both diagrams) is that it looks like two connections go into one socket (eg the bottoms of the router and switches). I'm sure even these days you can get switches with 10base5 or 10base2 or AUI connectors, but I've never seen one. In the 1990s we used to use hubs with 16 port of 10baseT and one 10base2 BNC socket, and occasionally we used the BNC socket, such as during a transition to 10baseT.

On the assumption it's just a drawing issue ...

If you're drawing a diagram which needs to emphasise cabling, such as a patch diagram or physical layout, you might draw it more clearly like this: 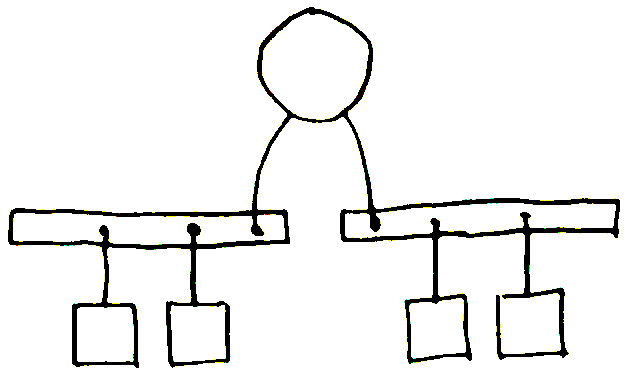 More usually we hide the layer 2 detail of switches and draw something like this, where a given broadcast domain is conflated just into a fat line: 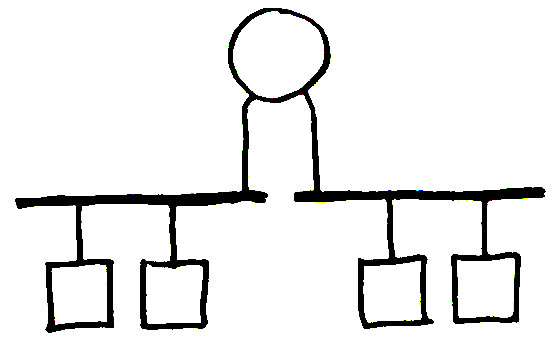 0
What type of routing algorithm is typically used in the fat-tree topology?
1
Overlay star network topology
2
Hub and spoke vs Star topology
0
Ethernet Protocols (Modbus TCP/IP & Ethernet/IP) can be in the same network and in a ring topology without problems?
1
What is difference between "topology of network" and "geometry of network"?
1
Does a receiver send acknowledgements after data received/failed in a bus topology and in ring topology? If so, how?
0
Which access methods and topologies are used for 10/40/100 Giga Ethernet?