Slotted Aloha Protocol divides up time into slots, each slot corresponding to one frame. Is this same TDM?

Slotted Aloha Protocol divides up time into slots, each slot corresponding to one frame. Is this the same as Time Division Multiplexing (TDM)?

The two protocols have nothing to do with each other.

Time-division multiplexing (TDM) is a method of transmitting and receiving independent signals over a common signal path by means of synchronized switches at each end of the transmission line so that each signal appears on the line only a fraction of time in an alternating pattern. It is used when the bit rate of the transmission medium exceeds that of the signal to be transmitted. This form of signal multiplexing was developed in telecommunications for telegraphy systems in the late 19th century, but found its most common application in digital telephony in the second half of the 20th century.

Time-division multiplexing is used primarily for digital signals, but may be applied in analog multiplexing in which two or more signals or bit streams are transferred appearing simultaneously as sub-channels in one communication channel, but are physically taking turns on the channel. The time domain is divided into several recurrent time slots of fixed length, one for each sub-channel. A sample byte or data block of sub-channel 1 is transmitted during time slot 1, sub-channel 2 during time slot 2, etc. One TDM frame consists of one time slot per sub-channel plus a synchronization channel and sometimes error correction channel before the synchronization. After the last sub-channel, error correction, and synchronization, the cycle starts all over again with a new frame, starting with the second sample, byte or data block from sub-channel 1, etc.

Typical connection types that use TDM: T1, SONET/SDH, and ISDN.

The ALOHAnet used a new method of medium access (ALOHA random access) and experimental ultra high frequency (UHF) for its operation, since frequency assignments for communications to and from a computer were not available for commercial applications in the 1970s. But even before such frequencies were assigned there were two other media available for the application of an ALOHA channel – cables & satellites. In the 1970s ALOHA random access was employed in the nascent Ethernet cable based network and then in the Marisat (now Inmarsat) satellite network.

ALOHA channels were used in a limited way in the 1980s in 1G mobile phones for signaling and control purposes. In the late 1980s, the European standardisation group GSM who worked on the Pan-European Digital mobile communication system GSM greatly expanded the use of ALOHA channels for access to radio channels in mobile telephony. In addition SMS message texting was implemented in 2G mobile phones. In the early 2000s additional ALOHA channels were added to 2.5G and 3G mobile phones with the widespread introduction of GPRS, using a slotted-ALOHA random-access channel combined with a version of the Reservation ALOHA scheme first analyzed by a group at BBN.

In additional to Cown's detailed answer, there are two pictures that can show the difference.

In TDM, nodes access to the channel in "rounds". Each node gets fixed length slot (length = packet transmission time) in each round. Unused slots go idle. Example: Slots 1,3,4 have packets to send. Slots 2,5,6 are idle.

In slotted ALOHA, all frames consist of exactly L bits. Time is divided into slots of size L/R seconds. Nodes start to transmit frames only at the beginnings of slots. The nodes are synchronized. If 2 or more nodes transmit in a slot, all nodes detect the collision.

For each node, if there is no collision, the node can send a new frame in the next slot. If there is collision: node retransmits frame in each subsequent slot with probability p until success. 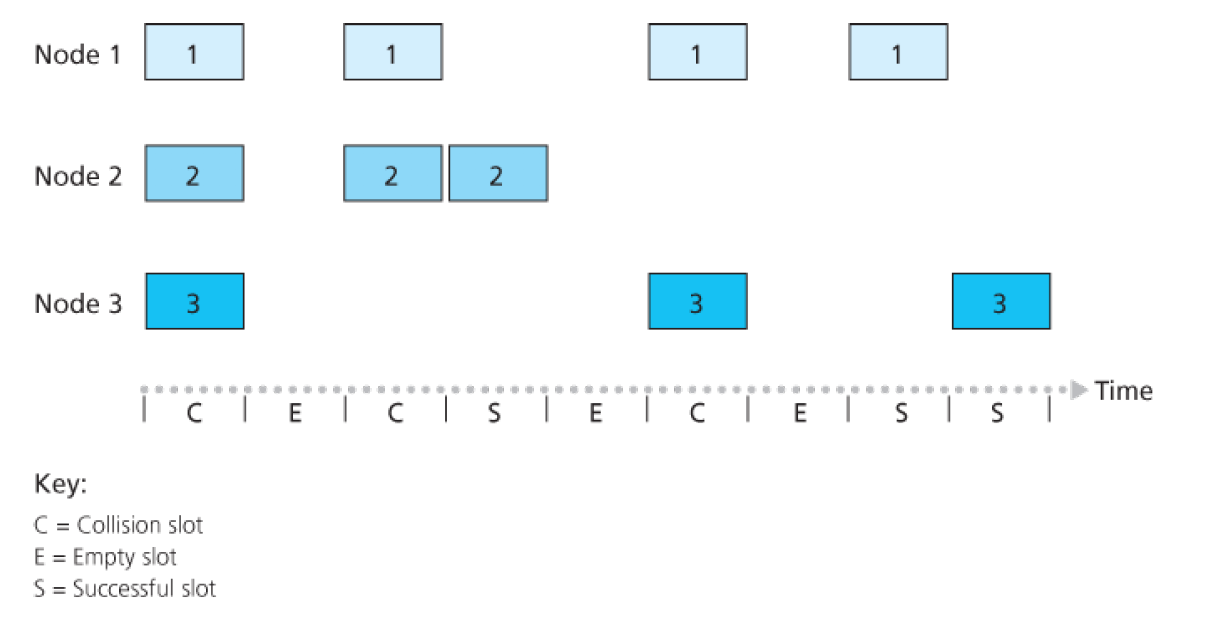 Not the answer you're looking for? Browse other questions tagged layer2 or ask your own question.

10
What is the relationship between the bandwith on a wire and the frequency?
2
Cisco ME3x00 - QoS for layer 2 trunks
6
Media Access Control for WAN protocols (equivalent to IEEE 802.3 Ethernet sublayer)
6
Ethernet Neighbor Discovery?
1
Is L2TP really a Layer 2 protocol?
2
Exact trunk operations over an incoming tagged frame
1
What is the correct CSMA p-persistent algorithm?
0
Clarification on when routers encapsulate and decapsulate packets
0
How does a 802.11 (wifi) frame identify the payload's layer 3 protocol?
2
How is P actually chosen in P-persistent CSMA?