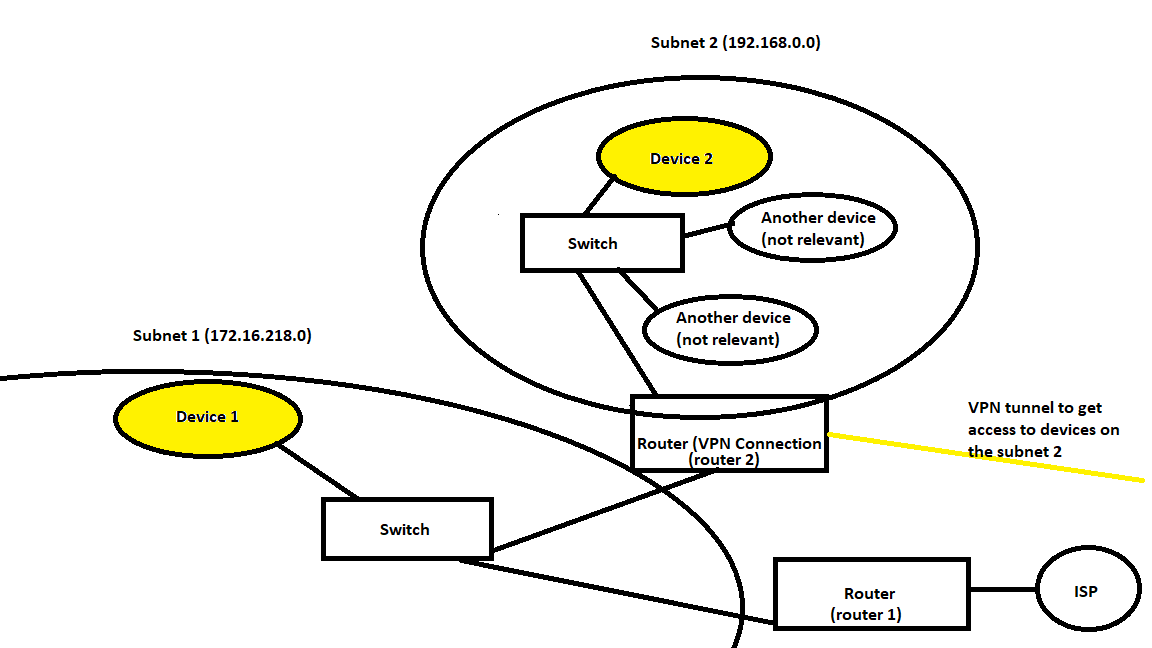 I have a problem regarding routing between two subnets. Here is how the structure of my company network looks like:

Now there's a device (device 1 - virtual server) in the network 172.16.218.0, which need to exchange the data with another device (device 2 - Siemens PLC) in the network 192.168.0.0 via so called OPC-Server (used mainly in industrial automation). Ideal situation would be that these two devices were in the same subnet, but unfortunately that's not the case.

My idea was to configure yet another router (router 3) between device 1 and device 2 and establish VPN connection between them. Before I do that, I wanted to ask if that all makes sense.

Edit: to be more specific: I added a picture in which you can see how the structure of the network looks like.
- Devices on the subnet 1 are getting IP-Adresses via DHCP.
- Devices on the subnet 2 are getting static IP-Addresses.
- Router 1 is used to get an access to internet.
- Router 2 is used to make a tunnel for a remote access to devices on the subnet 2 from outside subnet 1 and subnet 2 (via Internet).
- Device 1 and Device 2 need to communicate somehow (there is an OPC-Server running on the device 1).
- OPC-Communication works perfectly if the Device 1 and Device 2 are on the same subnet.
In the configuration of the OPC-Server (Device 1) we can set the IP-Address of the slave (Device 2) and the communication should already work (assuming we are on the same subnet). Here it's more complicated as they are on two different subnets.
- Router 2 is configured using mbConnect24 (Web Client) and router itself is an industrial router (mbNET). In the configuration there're two main aspects - LAN-Address for subnet 2 (192.168.0.0), let's say 192.168.0.100 and WAN address via DHCP. Configuration of this router is loaded to the device using mbConnect24 Portal.
- Now the question is - how to configure that network that Device 1 and 2 can exchange data?

That you for your help.

Ideally, all routers need to know the routes to each subnet.

Obviously, nodes on subnet 1 need to use Router 2 to communicate with subnet 2, either by having an explicit route or by using Router 2 as default gateway (which would need to handle traffic destined for everything behind Router 1 as well).

If Router 1 cannot learn the subnet 2 route then no device within that subnet can use any route across that router. A solution is to source NAT that subnet on Router 2 - this creates the problem that you cannot connect into subnet 2 from anywhere else. You can work around that using destination NAT / port mapping but this is where it gets really ugly.

If there's a VPN tunnel on Router 2 leading elsewhere (you aren't clear on this) the nodes behind that tunnel have the same problem as those on subnet 2.

Basically, you need to get Router 1's routing table updated, either statically or by a routing protocol like OSPF.

Not the answer you're looking for? Browse other questions tagged vpn ping or ask your own question.

2
VPN connection between 2 sonicwall devices
2
Static Route to Subnet via VPN
1
Connecting multiple remote networks to one main network through VPN
1
Ping from ASA over Site to Site VPN
3
Meraki in Passthrough mode behind ASA
2
How is traffic correctly routed in Site-to-Site VPNs where all sites are on the same subnet?