Hi I'm a newbie in Networking, still confused about some basic concepts. If given a picture below: 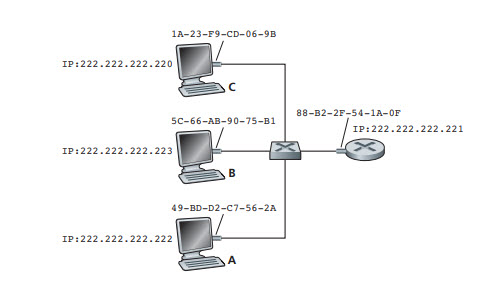 Let's say node C wants to send a datagram to node A but node C doesn't know node A's MAC address. So node C passes an ARP query packet which contains MAC broadcast address FF-FF-FF-FF-FF-FF and node A's IP address. I know node A will return its MAC address when it receives the packet. But what happen if the LAN use private IP address? what will the router do when it receive the packet? since the router's other interface might connect to some other node or even another switch, will the router broadcast the packet to all its interfaces?

This is a correct description of ARP for IPv4.

But what happen if the LAN use private IP address?

It doesn't matter what IP range the LAN uses as long as it forms one subnet.

what will the router do when it receive the packet?

When the (broadcast) ARP request doesn't ask for the router's LAN IP address the request is just dropped.

since the router's other interface might connect to some other node or even another switch, will the router broadcast the packet to all its interfaces?

No, a router does not forward L2 broadcasts that are used with ARP.

If node C wants to send an IP packet to a destination outside the LAN, its routing table tells it to pass the packet to the router as gateway. The packet is encapsulated by an L2 frame addressing the router's MAC. The router then receives the frame with the packet and forwards the latter according to its own routing table.

The router is constantly "veryfing" the destination IP address of every packet that comes to each one of its interfaces.

If the destination address matches with any entry of the routing table then it forwards the packet to the corresponding interface.

The following picture shows the Routing table of each router in a network:

When the router "sees" an ARP packet, it checks the destination IP and does the following checklist:

Not the answer you're looking for? Browse other questions tagged router ip or ask your own question.

6
Understanding ARP and Routers
1
Is router gw comes into the picture when the routing is within the same subnet?
1
When a source node sends a packet to a unicast destination, what will be the entry in the frame destination address(layer2 mac address)?
1
How does router find a way to host in its own subnet?
1
Basic understanding of network operation
2
How does the switch learn the mac addresses when it's connected to a router?
2
Why does arp request get broadcast even though it knows the ip address of receiver?
2
How does a router know the destination mac?
0
Does NAT change the L3-Encapsulation at all?