Do routers change MAC address of packets when forwarding 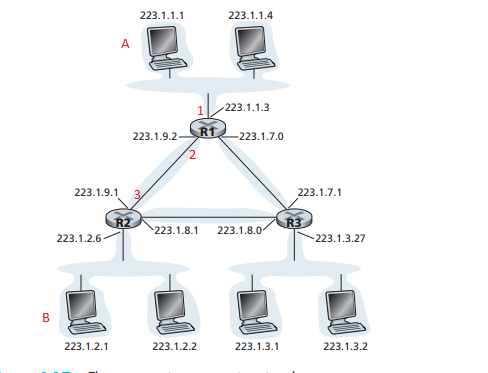 Lets say host A wants to send a packet to host B through R1(interface 1 then 2) and R2 (interface 3), so my questions is:

isn't a router only deal with IP address

MAC addresses only have meaning within an Ethernet network.

Logically what happens at R1 is.

* Broadcast and multicast packets need more special handling, but that is outside the scope of this question.

When a frame comes into a router, the router strips off and discards the frame, losing any layer-2 addressing, including MAC addresses. The router will build a new frame for the next interface.

It's only rewording what others have already said, but the way I usually explain this is with a thought experiment:

Simple answer, layer 2 addresses don't cross layer 3 boundaries. ARP only works on the local subnet/vlan. Host B will only see the MAC address in the frame for router 3's local interface.

Next, a routing lookup takes place in a VRF table associated with the ingress L3 interface. The result of that lookup is a FEC that should have the following info:

With that information a new L2 header is constructed, and the frame is transmitted out of the resolved egress interface.

Not the answer you're looking for? Browse other questions tagged routing router mac-address or ask your own question.

6
Understanding ARP and Routers
4
When a datagram moves through a network, do the MAC or IP addresses change?
1
How do routers traverse packets to their destination?
1
Basic understanding of network operation
2
How router knows MAC address of its next hop when the forwarding table only has egress interface
3
Quagga router advertisement messages are wrong after an address change
1
Under what circumstances is the ARP table updated?
1
How is an IP packet sent to the gateway?