What I mean with my question is: every ISP gives each client a X speed, like 100 Mbps, 400 Mbps, etc. In DOCSIS technology, they can set the speed limit on the ISP Router, so I have no doubts how they limit client speeds on DOCSIS.. But on FTTH/GPON the architecture is very different, and the ISP router doesn't have any limitation (clients can even use their own router), so the speed limitation is made ISP side...

The thing is: how they limit each client speed, if each OLT port handles many clients (normally splitted in 32), and all the network equipments between the OLT and client ONT are passive (splitters)? That means the network traffic of at least 32 clients is aggregated in one, before it's handled by 1 OLT port...

Is it limited ONT side?

This article discusses traffic flows in GPON. As discussed in GPON Fundamentals article, the OLT is the first aggregation point in GPON access network. The OLT terminates the GPON Transmission Convergence (GTC) layer on the user side and forwards Ethernet frames to Ethernet layer on the network side. Figure 1 shows the termination points for ONU/ONT scenario.

The V reference point represents the network-facing interface of the OLT.

Relationship between T-CONT and GEM Ports

T-CONT: A traffic bearing object within an ONU/ONT that represents a group of logical connections, and is treated as a single entity for the purpose of upstream bandwidth assignment on the PON. In the upstream direction, it is used to bear the service traffic. Each T-CONT corresponds to a service traffic of one bandwidth type. Each bandwidth type has its own QoS feature.

ALLOC_ID: Each T-CONT is identified by the ALLOC_ID uniquely. The ALLOC_ID ranges from 0 to 4095. It is allocated by OLT i.e. a T-CONT can only be used by one ONU/ONT per PON interface on the OLT.

GEM Port: A GPON Encapsulation Method (GEM) port is a virtual port for performing GEM encapsulation for transmitting frames between the OLT and the ONU/ONT. Each different traffic-class (TC) per UNI is assigned a different GEM Port. Each T-CONT consists of one or more GEM Ports. Each GEM port bears one kind of service traffic i.e. a T-CONT type.

GEM Port ID: Each GEM Port is identified by a port ID uniquely. The Port ID ranges from 0 to 4095. It is allocated by the OLT i.e a GEM port can only be used by a single ONU/ONT per PON interface on the OLT.

Figure 2 shows the relationship between T-CONT and GEM Ports. 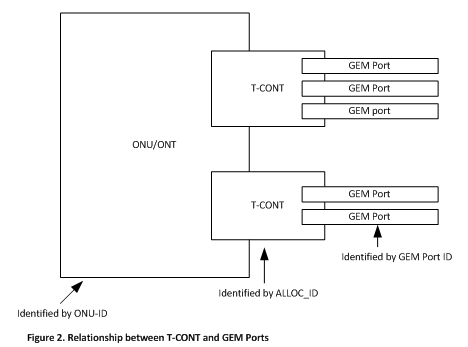 Between the ONT and OLT is the ODN, and Ethernet frames are carried over it through the use of GEM Channels. GPON has GEM channels as part of its GTC layer. The GEM channels carry variable-length Ethernet frames. GEM channels are identified by GEM Port IDs. This identifier is assigned by OLT upon creation of a new channel and is only valid during the entire life-cycle of the channel. Each GPON interface for a given ONT can have several GEM Ports. A GEM Port ID is unique per GPON interface and represents a specific traffic or group of flows between the OLT and the ONT.

There are 2 types of GEM Channels:

On U interface, traffic is classified into VLANs with various Ethernet priorities based on: Physical Port, VLAN ID, 802.1p bits, &/or DSCP. Once the traffic has been assigned a VLAN and COS (802.1p) values, these two values are used to select an upstream GEM Port so that QoS can be applied to the flows carried by the GEM Port. A GEM Port always belongs to a single T-CONT. In downstream direction, the ONT forwards the traffic received by GEM Ports to appropriate U interface.

Figure 5 shows a sample model of upstream traffic management. It shows 4 T-CONTs per PON interface where each T-CONT represents a specific traffic class (TC). The Classifier receives traffic from U interface and maps to queues as per configuration using associated GEM Ports. If a second UNI interface is present on the same ONT, it would also perform classification and map the traffic to TC(s). As mentioned above, a GEM Port must bear one or more T-CONTs. Other upstream traffic from other ONTs is mapped to other 4 T-CONTs according to the TC.

At the OLT, each TC is mapped into a separate queue. T-CONTs from various ONTs that share the same TC are mapped to the same queue, and a scheduler is used among the queues towards the network-facing port i.e. V interface. 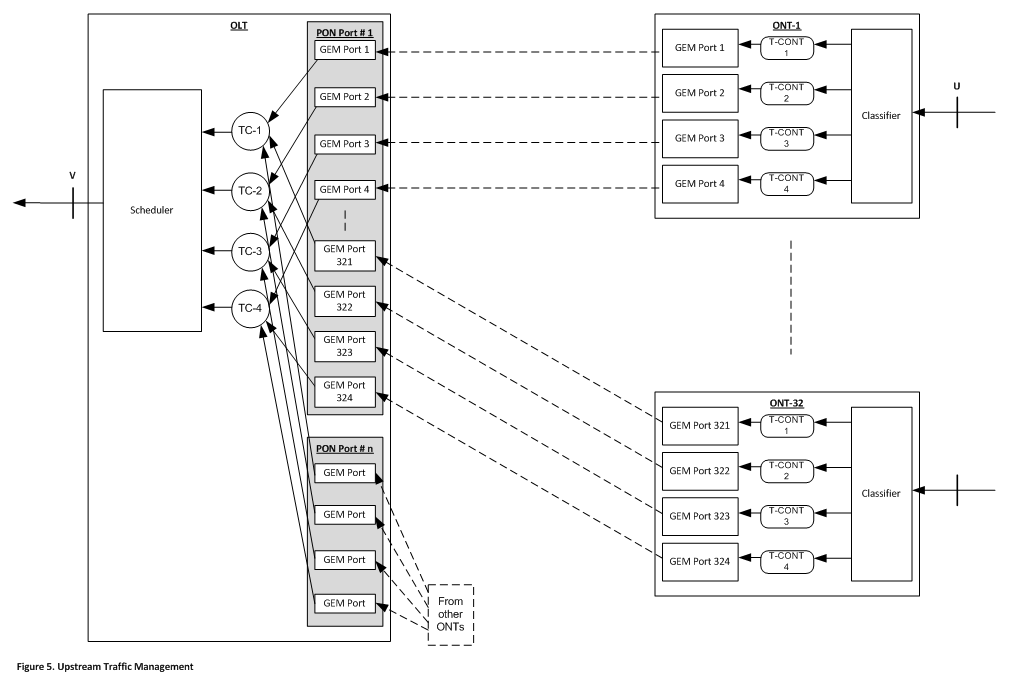 Figure 6 shows a sample model of downstream traffic management. In downstream direction, T-CONT is not used. Traffic received from the V interface at the OLT is assigned to queues according to the TCs. It is then transmitted in the downstream direction to the PON interface by using a scheduler. At the ONT, the traffic is classified again and placed into appropriate queues for each U interface. A scheduler is used to transmit frames to the U interface. 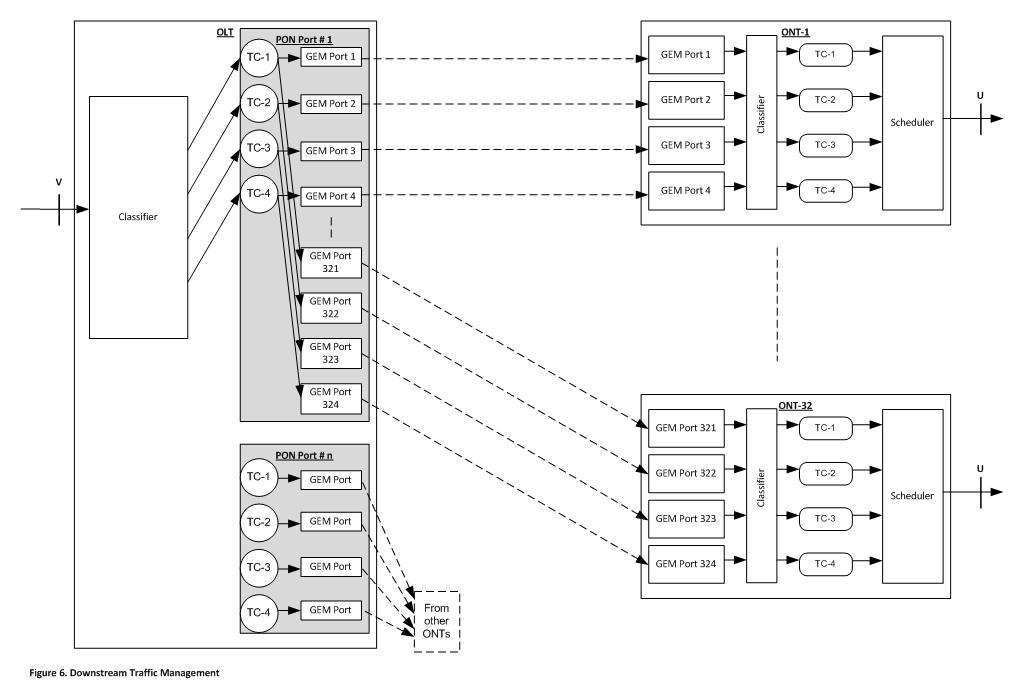 Not the answer you're looking for? Browse other questions tagged speed ftth or ask your own question.