I have been trying to understand how and what tables are populated ( if they are clean at the start) when a ping command goes through. Lets say I have this network: 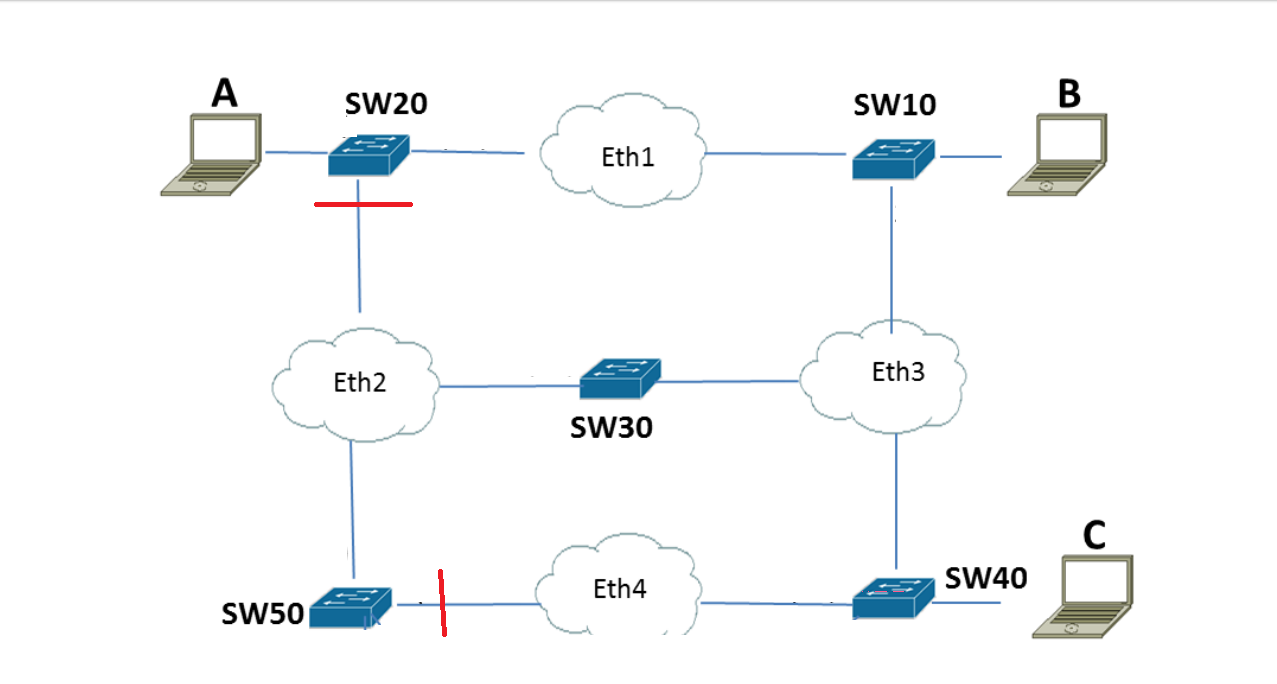 I want to send a ping command from PC A to PC C. I have a couple of questions regarding this -

Can someone guide me step by step on what's happening here if a ping command is sent.

There are some large issues with this network.

Diagram: Let's start with the diagram. It's very unusual to draw an ethernet as a cloud. Clouds suggest "unknown and immaterial amount of networking equipment", and normally these are routers. Sometimes you draw clouds of switches, but that doesn't make any sense in a question about switches and their address caches.

On the assumption that your ethernets are single ethernets ...

No routers: So-called "Layer 3 Switches" are not switches: they are switches with a router in the same box. You can also get switch modules for routers, which is a router with a switch in the same box. The difference between any configuration of router and switch and another is only performance and marketing emphasis: "you don't have a mere layer-2 switch you poor thing?". Be clear: a layer 3 switch is a marvelous thing, but it's not really a switch.

On the assumption your switches are pure switches (layer 2 forwarding) ...

No VLANs: You could split up your network with VLANs and so on, but you make no mention of it.

On the assumption your switches are all plain, single-default-untagged-no-VLAN plain switches ...

(There are actually several ways that diagram could be interpreted in an actual twisted pair ethernet, but the issues are the same whichever way it's done.)

Your network is actually this:

You can see there are loops in this ethernet. Ethernet is not permitted to have loops, as the frames will go round and round. Whatever is the first frame out of A will go into switch 20 port 1. Switch 20, having empty MAC address map, will flood it out of all its ports 2 and 3, to switches 10 and 30. Those in turn will send to each other. Let's suppose 10 sends to 30 first, arriving on port 3. Switch 30 will flood it out of port 2 arriving at switch 20 port 3, which floods it out of ports 1 and 2. It will go around indefinitely. What you would normally see is all the lights light up on every switch, and no network traffic until you unplug or reboot something.

Unless you disconnect some wires or introduce spanning tree protocol to do it for you, this network will not function.

Notice the red lines on the original diagram: I'm guessing these are the spanning tree disconnections.

Let's assume you introduce Spanning Tree Protocol on all the switches and the network has disconnected SW20 port 3 and SW50 port 3.

Network now has no loops

Until something changes -- cable unplugged, system failure of some kind, something switched off -- the network now looks like this, with SW20:3 and SW50:3 both disabled by STP:

_with all the assumptions in place, we can answer your question.

Assuming all ARP caches and MAC-port mapping tables are empty.

At this point every switch except SW50 knows which of their interfaces to find both A and C. (Switch 50 only knows about A as it didn't see C's reply.)

If, A knew C's ether address, but none of the switches did (such as if they have just been power cycled), A will skip the ARP request, which is a broadcast. The first thing it would do is send the ICMP ECHO REQUEST, unicast. The actual frame forwarding would be the same as the switches would flood the echo request out of every port, just a like a broadcast, as it doesn't know where it is.

Your diagram is somewhat misleading - modern Ethernet uses point-to-point links, so SW10 would have two connections towards SW30 and SW40. As it is, your diagram indicates an obsolete Ethernet medium with shared access and multi-tap connections like 10BASE5.

Ping uses ICMP echo requests and replies which are transported over IP. In this network, IP in turn uses Ethernet frames for layer-2 transport. For this, IP uses ARP (IPv4) or NDP (IPv6) to resolve the destination IP address to the destination MAC address. Both methods will already populate the switches' MAC tables, so the actual echo requests/replies will get forwarded along the required path.

In terms of switches what is the difference between a layer 2 and layer 3 one?

Does a Layer 3 switch have a routing table and a layer 2 one doesn't?

Yes. The router in a layer-3 switch needs to have a routing table while a basic switch has no use for it (unless it features in-band management functionality).

When some traffic has traveled across the network all MAC tables are populated, associating the end nodes' MAC addresses with the respective switch port they are connected with.

On SW10, A's MAC address is associated with the left-hand port, B's and C's addresses with the right-hand port, and so on. Assuming basic L2 switches, the switches themselves have no MAC address, they are bridging transparently.

Alternatively, PC B could send the ARP reply as broadcast, making its MAC address known to all switches and other, interested hosts. Broadcast ARP replies are possible but not standard (similar to gratuitous ARP).

Each switch only knows the associations for its own ports, ie. which one of its links leads towards the destination.

Once you've grasped how layer-2 forwarding (bridging) works you can have a look at layer-3 forwarding (routing) - don't mix them, they are completely separate.

If both PCs are on the same network, no routing takes place at all.

Sw20 will receive the ICMP frame from PC A and forward the frame out the interface it knows PC C is connected to, or, if it doesn't already have PC C's MAC in the CAM table, Sw20 will flood the frame. The next switch in the network (let's assume that would be Sw10; the red line in your diagram implies that the link between Sw20 and Sw30/Sw50 is perhaps blocked by STP) will forward the frame out the proper interface following the same logic as before, again flooding the frame if PC C's MAC isn't in its CAM table.

If PC C eventually receives the frame, it will respond and each switch will populate its CAM table accordingly. And you may have guessed that each switch will already know which port to forward the reply frame because PC A's MAC is now in the CAM table!

MACs age out of the CAM table every 300 seconds by default (this value can be changed on a managed switch) on Cisco/Juniper/HP switches - I think this is very standard but I don't know for sure. Every time a host sends/receives any frames the timer is reset by the switch.

Not the answer you're looking for? Browse other questions tagged ethernet arp ping or ask your own question.

2
ARP table is not updated with NMAP
1
Ping a host that is in the same LAN
4
How will be the ARP Request (Unicast/Broadcast) if Subnet Mask is Unknown
3
Pinging computer on a local wireless network, what exactly happens?
0
ARP behaviors between hosts connected via switches
1
Prevent Users from Setting Specific Static IP
0
Is the "ping" command a broadcast message?