Firewall on a stick for Intranet and static routing

I have a question about possible problems that can occur with this network design.

If I have an intranet with a firewall on a stick design, multiple switches with layer 2+, is this setup fine? or should dynamic routing and an entire network infrastructure redesign be done? is there a book or a website that can explain why this setup is wrong, or how to prevent setups like this?

To explain more in detail:

I'm just curious on the possible problems I should be on the lookout for to detect? a good book explaining a better network design can go a long way for me and I would appreciate the recommendation.

to give better information, I added a picture. yes there are hosts hanging off the switches that dont have hosts - I was just too lazy to put them there :) happy thx giving to those that celebrate it. 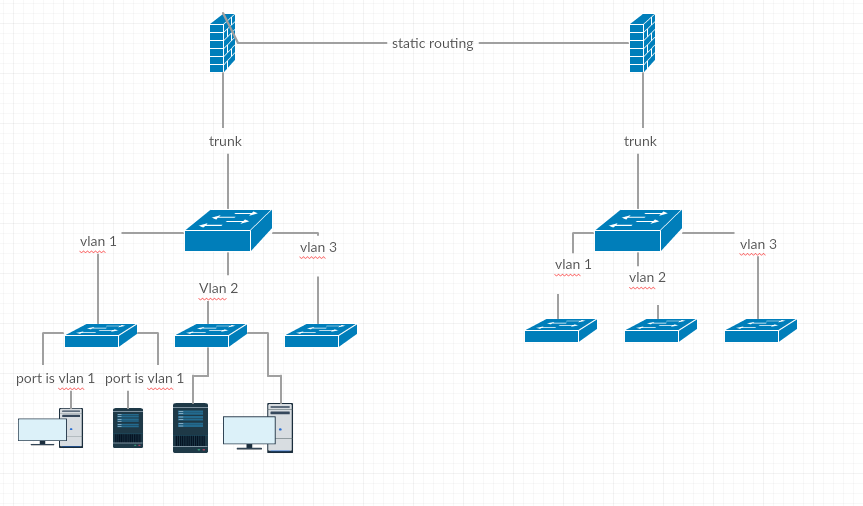 There isn't much wrong with your network as it is. If things are working and you're not overloading your connections, you're probably fine. But here are two suggestions:

Firewall on stick is not a good idea because all traffic will reach firewall to process packet forwarding. it will make firewall resources usage for unwanted job. Firewall is basically a security devices where all the security profiles are enable and packets inspected is done for intruders , virus ,malware ,web filtering, content filtering etc .

Not the answer you're looking for? Browse other questions tagged routing firewall layer2 layer3 or ask your own question.