Multiple Networks on Sonicwall with no access to cisco firewall

The issue im having is that i have 2 networks with 2 internet connections. We now all of a sudden have a POS system handling our network. This system blocks our email and a bunch of pages we use. They refuse to open it up "to secure their POS system" and want to force us to rent their Emails. We already have established business emails and dont want to have to not only pay more but have to deal with the logistics of new email addresses.

The goal is to have the second network act as a second internet route that we can set programs like thunderbird to talk to. Their POS system tracks where the requests come from and refuse to let us log in unless its through their firewall on their ISP access so we need to be able to talk to them through their proxy on their network for the POS but use other internet programs on our own ISP.

I have tried routing, nat, firewall access rules, experimenting with different other options like portshield but nothing works. Both networks can see the Sonicwall at 10.62.87.253 but neither network can see past that. I need the 10.62.87.0 computers to be able to talk to the 192.168.1.0 network. 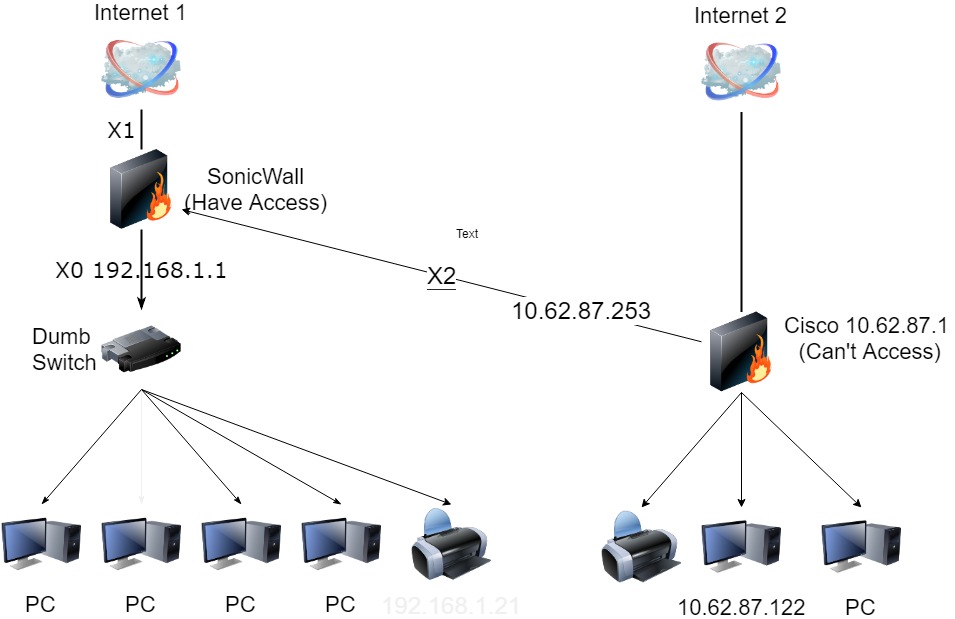 The answer seems to have been to set the sonicwall network to the same subnet as the cisco network (X0:10.62.87.253 to second WAN and X2:10.62.87.252). This allows all computers to talk to each other. Then in the windows machine static routing traffic to certain addresses like email to the second gateway with route add.

Not the answer you're looking for? Browse other questions tagged routing network internet sonicwall interface or ask your own question.