However, when adding another routing instance into play, let's say "client-1" with a default route with a next-table of "global.inet.0" traffic does not flow when ingressing or egressing through the other vSRX.

Outbound is sort of fine, because I can put equal preference on the routes out via iBGP and the local transit, but obviously inbound is beyond my control - so in the example below if Transit 2 was my inbound route 1.2.3.4 would not be pingable but 1.2.3.5 would be. 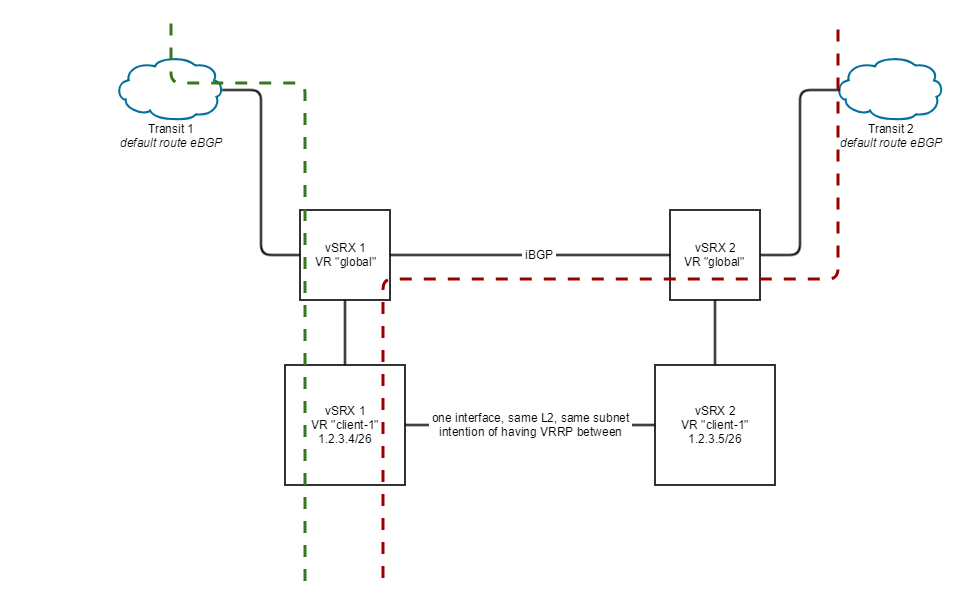 I've checked the basics such as host-inbound stanzas on the security zones, global ping is enabled, etc.

When pinging 1.2.3.4 and Transit 2 is the inbound route in the example, vSRX 1 can see the ping packets arriving (the correct place) but no ICMP response is given:

Interestingly, a loopback on vSRX 1 in this case that sits in the "global" routing instance, with the route in via Transit 2 is reachable.

Any ideas why the ping packets arrive in the right place, but do not get a response?

Outbound traffic is jumping between isolated routing-instances with your next-table policy - do you have a return route to 1.2.3.0/26 in inet.0 in vsrx2 (and vice-versa) with a next-table client-1.inet.0? Do you have a more specific route for 1.2.3.4 on vsrx2 with a next-hop of vsrx1?

Otherwise, I don't think this is going to work - specifically for the SRX interface addresses - if I'm not mistaken, return traffic via vsrx2 is going to see a static route for 1.2.3.0/26 with a next-table of client-1.inet.0 and try and egress locally (which will break the flow).

I'm a bit confused by your flow output on vsrx2 though - according to your diagram, 1.2.3.4 is on vsrx1, but the flow output says that it's from vsrx2 and shows a return interface of local (suggesting that the destination address 1.2.3.4 is an IP owned by vsrx2) - I would expect to be seeing the logical interface between vsrx2 and vsrx1 instead?

Not the answer you're looking for? Browse other questions tagged routing router bgp juniper juniper-junos or ask your own question.