the meaning of static routes and next hop

i configured a network topology on cisco packet tracer to learn about the static routing, as shown in figure below 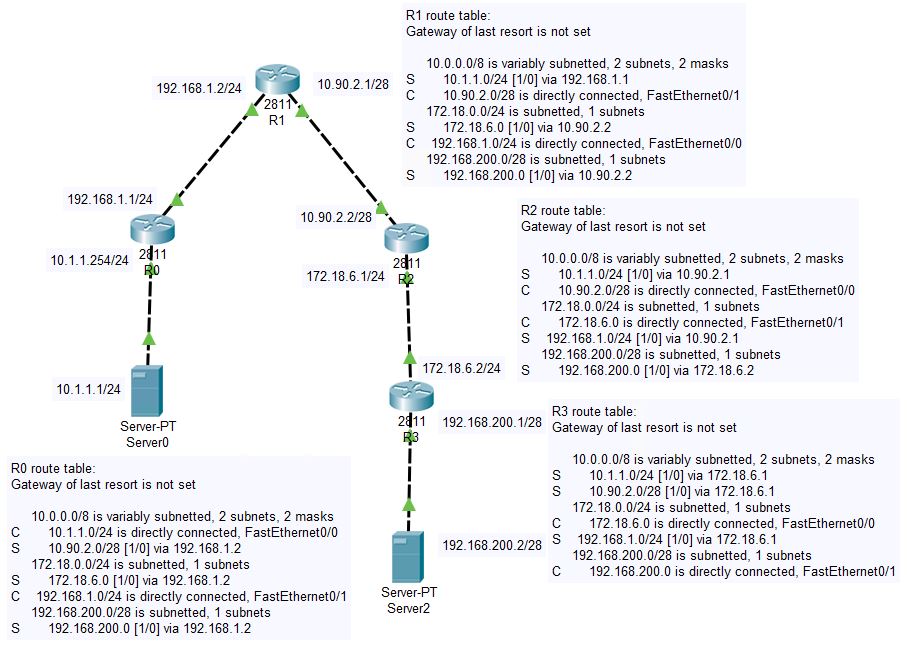 i spent a lot of time to ensure the connectivity between server0 and server2(cause i'm new to networking) and it worked eventually. the servers can access each other's http web.

thanks for any reply! i hope these questions are not so dumb :|

Routers learn networks by one of three methods:

do all the static routes settings on the routers necessary? cause there are so many lines which took me quite a while to configure for the connections between servers...

Since you're not using a routing protocol, all remote networks on each router need to be set up with static routes. With only a single upstream router, you can alternatively use that as gateway of last resort.

for all the routers, is it necessary to configure static routes and next hop for all the dest. network(which located on other routers) to enable the accessibility between server0 & server2?

Yes. If any of the routers doesn't have a gateway to the destination it'll drop the packet.

does "gateway of last resort" meaningful in this network topology? i don't see a way to use it :(

Each router's gateway of last resort aka default gateway can be used to simplify the routing table as pointed out above. Especially R0 and R3 face only one gateway to all other subnets and that could be their default gateway.

Static routing is also referred as one to one routing . Administrative distance of AD value is 1 .

Next hop is path towards next hop router . Example below .

Not the answer you're looking for? Browse other questions tagged routing next-hop or ask your own question.

7
Cisco PBR verify-availability with interface instead of next-hop
8
Static routes: numerical next-hop vs interface
1
Brocade PBR next hop to firewall based on network destination
0
Basic IPv6 Static Routing (Global Unicast Routing)
1
Dual WAN Access - Cisco PBR default next-hop
1
Prevent OSPF routes advertised by other routers from entering the routing table?
1
Routing infrastructure doubt. It is a functionally design this?
1
Why do IP(v6) routes require a next hop IP(v6) address and not just a MAC Address?