Partitioning between VLAN in a Trunk switch architecture

Supposing we have a Trunk switch architecture with multiple VLANs as shown below : 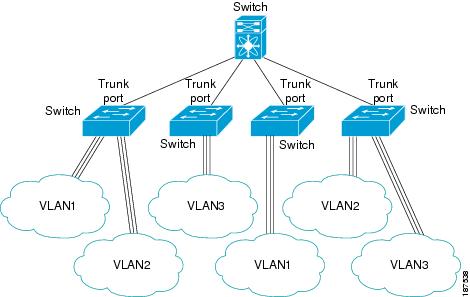 However, what prevents this computer from tagging his frames with the number "3" and being able to communicate with any VLAN3 even if he belongs to VLAN1?

Does it mean that Access mode architecture is preferred for security purposes?

To rephrase a bit what Ron Trunk already said:

However, what prevents this computer from tagging his frames with the number "3"

Nothing. There's nothing you can do from a switch administrator's perspective to prevent this. If the connected computer has the capability to send tagged frames, it may do so.

and being able to communicate with any VLAN3 even if he belongs to VLAN1?

Now here's something a switch admin can (and probably should) do, in (at least) two ways (and some add-on).

Does it mean that Access mode architecture is prefered for security purposes?

Running all and every port untagged will sooner or later show some scaling (cable and port density) and cost issues, worsened by growth of the computing infrastructure.

Some policies will say to never mix VLANs of different security zones (as in "internal" vs "DMZ" vs "external") on the same 802.1q trunk [1], while some will let you mix internal and DMZ while keeping external VLANs separated, and some may just not care.

[1] mandating not to mix internal/dmz/external VLANs on a given 802.1q trunk to a server/computer also suggests to segregate switching platforms for internal/dmz/external. After all, if a 802.1q trunk to a server/computer may not contain VLANs of different security zones, why should a trunk between two switches be allowed to? Still, there may be good reasons to run the internal VLANs and the dmz VLANs on separate trunk links from the same single switching platform to the same single host, but again, it's all up to the given security and operational policy to allow or forbid.

Most of the time, a computer is connected to an access port--not because of security, but because most computers don't need to switch VLANs. And since they don't switch, most NIC cards can't create 802.1q frames required for tagging VLANs anyway.

On most enterprise-class switches, an access port will drop tagged frames as a security measure.