I'm preparing for JNCIS-SEC exam. I used junos-vsrx-12.1X47-D20.7-domestic image to create virtual machine in order to practice for the exam.

I am following this to configure the vsrx. When I do the following command : 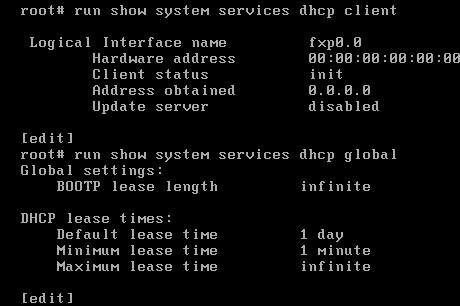 I am trying to create the following topology :

I am working on a pc which is connected to local area network which uses Juniper switches. The port I am connected to might not be configured as dhcp-trust

why I am not obtaining an IP address ??

The selected answer solved the problem along with the following command :

instead of dhcp client in the previous command

When you are running the SRX stand-alone (eg: not clustered), the first port is ge-0/0/0. It's only when you switch the unit to a chassis cluster member that the interface becomes fxp0.

and you will be ready to go.

Not the answer you're looking for? Browse other questions tagged dhcp juniper-srx vmware or ask your own question.