Does “tunnel” here mean the same as tunnelling as in SSH?

From book Data and Computer Communication

Tunnel Unlike the proxy and the gateway, the tunnel performs no operations on HTTP requests and responses. Instead, a tunnel is simply a relay point between two TCP connections, and the HTTP messages are passed unchanged as if there were a single HTTP connection between user agent and origin server. Tunnels are used when there must be an intermediary system between client and server but it is not necessary for that system to understand the contents of messages. An example is a firewall in which a client or server external to a protected network can establish an authenticated connection and then maintain that connection for purposes of HTTP transactions.

Is that related to SSH tunnelling and https://en.wikipedia.org/wiki/Tunneling_protocol? I feels not. SSH tunnelling is to encapsulate another protocol inside SSH protocol in a connection. So a tunnel should look like a line, but the books says and shows a tunnel as a point. if I am correct, what is "tunnel" in the quote? How is a SSH tunnel a relay point between two TCP connections?

In what sense "the tunnel performs no operations on HTTP requests and responses"? 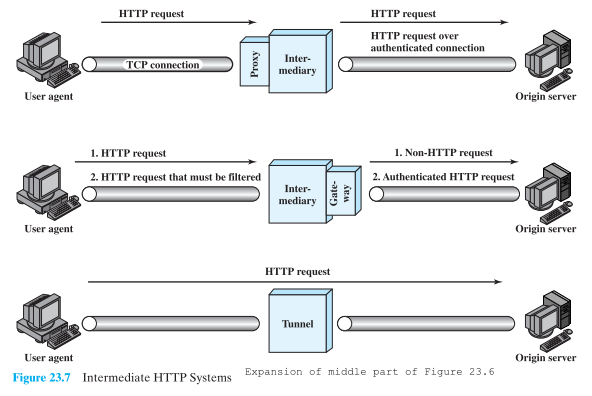 The tunnel described in the passage is a very generic and abstract concept. You could say that SSH tunneling is one example of that.

Not the answer you're looking for? Browse other questions tagged tunnel ssh or ask your own question.