In OSPF, can I have an NSSA router act as the DR for the ABR router in area 0?

I have a router in an NSSA area attached, via an ABR, to area 0; this is done through a broadcast link with a point-to-point address (31 bit prefix), so there are basically only two routers on this network segment.

*NOTE No please allow me to clear up any confusion on the wording, because there are people out there that get easily confused by the words, VERY easily confused.

New answer for the edited question:

In such a situation, there are several possibilities:

In any scenario, each of the two routers on the network will need to form a full adjacency with the other router on the link. In such a case, it would be normal to configure the interfaces on the routers to set the OSPF network type to be point-to-point using the ip ospf network point-to-point interface command because there is no real need for a DR/BDR.

The idea behind using a DR/BDR is for links where there are multiple OSPF routers to prevent the need for each router on the link from having to form a full adjacency with every other router on the link. That can quickly get out of hand (exponentially). By using a DR, then every router only needs to create one full adjacency with the DR (and one with a BDR, if there is a BDR, which is not a requirement). That can drastically cut back on the number of adjacencies (router resources) and OSPF control traffic required on a broadcast link.

If there are only two routers on a link, then it makes sense to set the OSPF network type to point-to-point to let them simply form full adjacencies with each other, which is going to happen in any scenario. In any of the scenarios, the router resources used for adjacencies will be the same, and eliminating the need for DR/BDR makes sense because that is one less thing for a router to do.

You can even use an OSPF point-to-point network on smaller prefixes, e.g. /24, if there are only two OSPF router in the network.

Original answer for the original question:

OSPF will always form an adjacency with the neighbor on the other side of a point-to-point interface such as point-to-point serial lines. There is no concept of DR or BDR. The state of the serial interfaces is point to point.

An OSPF point-to-multipoint interface is defined as a numbered point-to-point interface having one or more neighbors. This concept takes the previously discussed point-to-point concept one step further. Administrators do not have to worry about having multiple subnets for each point-to-point link. The cloud is configured as one subnet. This should work well for people who are migrating into the point-to-point concept with no change in IP addressing on the cloud. Also, they would not have to worry about DRs and neighbor statements. OSPF point-to-multipoint works by exchanging additional link-state updates that contain a number of information elements that describe connectivity to the neighboring routers.

Below are the OSPF network types, including the Cisco extensions. Please note the multipoint links (what you ask about in the question) do not elect DR/BDR, which is what makes your question moot. 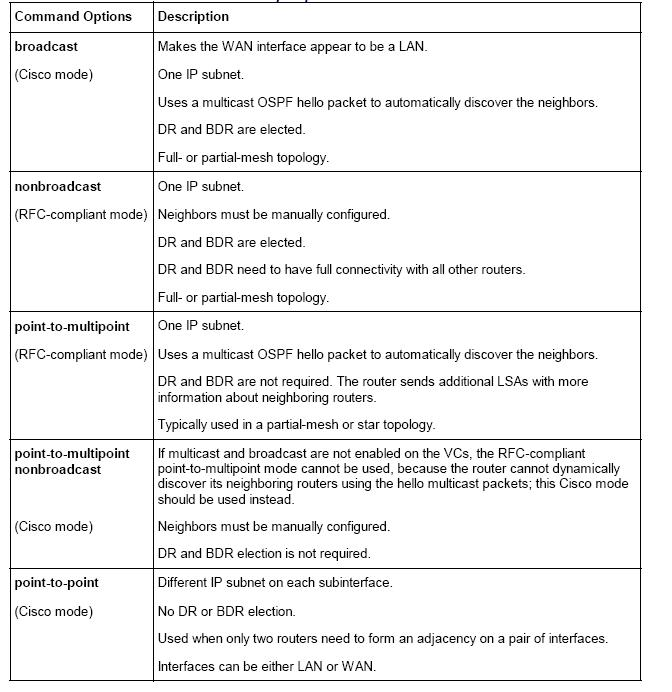 Perhaps you will believe RFC 2328, OSPF Version 2 (emphasis is mine):

Alternatively, neighbors on Point-to-MultiPoint networks may be dynamically discovered by lower-level protocols such as Inverse ARP ([Ref14]).

The router in the NSSA area can take the role of the DR with no averse consequences. That is because in this scenario, the are only two routers on the broadcast link, as it has a 31-bit prefix.

Not the answer you're looking for? Browse other questions tagged ospf or ask your own question.

9
What is the advantage of an “area” in OSPF configuration?
3
if ABR and ASBR both are the same in OSPF,what might be reason to use NSSA?
3
How to Summarize LSA Type 7/NSSA ASBR External routes?
8
OSPF Backbone Area and the WAN
1
Virtual Link in OSPF
4
Inter-Area Loop Prevention in OSPF
1
OSPF Point to Point network ABR advertisements
1
What's the proper way to route a subnet through an OSPF area?
1
Is the Backbone Area connected AS Area are through one router?
1
OSPF: What's the consequence of two nssa area translator router